‘Her parents were very pushy’: Grandparents dish the dirt on competitive in-laws 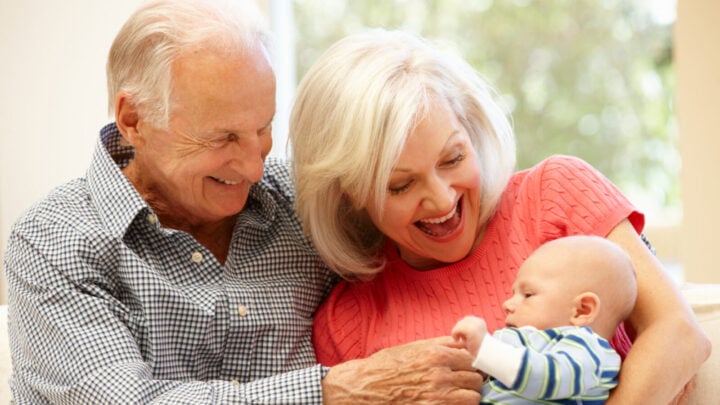 Becoming a grandparent is one of life's great joys, but some grandparents take their new role a little too serious. Source: Getty (models posed for pic)

Competitive grandparenting … it’s not fun for anyone. One grandparent gets super competitive and has to be first one to hold the baby, visit the new mother and baby in hospital and babysit. While in some cases both sets of grandparents are equally as competitive, more often than not, there’s one side that is far more relaxed and not interested in getting entangled in a heated exchange, but it sure is frustrating!

One Gransnet user has now questioned what all the fuss is about when it comes to being the first grandparent to cuddle or visit a newborn, asking, “Have they got so little in their lives?”

“What is it with grandmas who want to be the first to cuddle and kiss a newborn over other grandmas?” she questioned. “And get offended if they are the second to visit? If I have DGC [darling grandchild] I’ll wait to be invited and offer help. I don’t see why I should be first in the queue.”

Their question prompted a slew of responses from other like-minded grandparents, who have found themselves in similar situations with competing grandparents.

One user explained that when her grandson was born her daughter-in-law’s mother was particularly overbearing.

“Ditto … except for the DIL’s [daughter-in-law’s] mother, it’s her first grandchild so was a bit full on at the beginning and I really thought I was going to have problems with her being around the grandson 24/7,” she wrote. “Even her daughter had to keep reminding her not to be so full on. Saying that, we have all settled into a nice grandparent routine of helping with childcare. I do one day a week and the other grandmother does one day. We all meet up for family events.”

Another said they had a difficult time when their eldest son and his wife had their first baby, explaining her DIL’s parents were very pushy and “insisted on being there every day — even if we were going over”.

“We lived 30 miles away — they were five mins away,” the Gransnet user explained. “We just let them get on with it and it was soon us who were asked to babysit often. I think my DIL got fed up with being told how to be a good parent. She has three sisters all within walking distance of their parents too.”

One commenter recalled a memory from when her first child was born and how her own MIL overstepped.

“When my first child was born my MIL arrived in the ward on the day we were going home, picked up the baby and walked out of the hospital with her,” she said. “I was heart broken. My husband took no notice. I’m afraid I never forgave either of them. Over 60 years ago now, but I still feel cross about it.”

However, competing grandparents isn’t the case for every family, and one grandmother who lives in a different country to her family, says she’s thankful for the other set of grandparents who live much closer.

“I have two GC on the other side of the world whose maternal grandparents are 20 minutes away, and I’m so glad they have those grandparents. Ridiculous all this jealousy. Sorry but it makes me cross when GN [Gransnet] posters whinge at only seeing their grandchild once a fortnight or something. I’d love that!!”

Another said her worst fear is being thought of as an “interfering granny, or indeed MIL”. “I will always wait to be asked over, wait to be offered a chance to hold the new baby, and try desperately not to give advice unless asked for it,” she said. “Different relationship with DD [darling daughter[, she tells me she wants me to leap in and remind GD [granddaugter of penalties for misdemeanours!”

While one simply said competing over a grandchild was a waste of energy. “Why should any grandma be competitive?” she questioned. “What a waste of energy, it’s a baby for heavens sake, not a thing to pass around like a toy. I wouldn’t have a clue if I was the first grandma to hold my grandchild or the other grandma, but who cares!”

Have you experienced this in your family?