Writer likens grandad ‘bribing’ granddaughter for hug to ‘Me Too’ movement 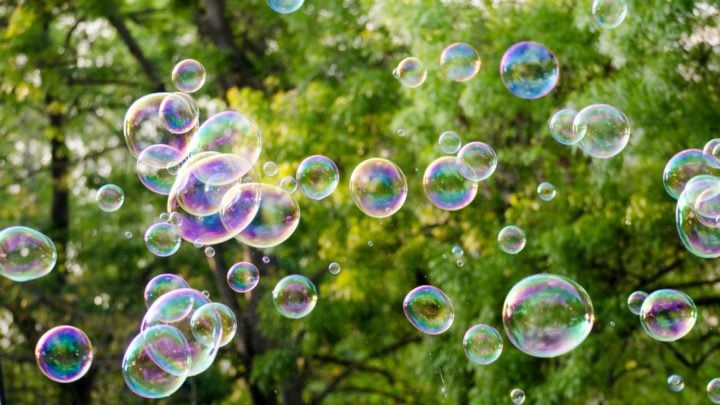 A mum was outraged after her father-in-law offered to blow bubbles for her daughter in return for a hug. Source: Getty

A feminist writer has sparked a huge reaction online after comparing a grandad telling his granddaughter he’d blow bubbles for her in return for a hug to the ‘Me Too’ sexual harassment movement, claiming children shouldn’t feel “forced” to hug and kiss their family members.

Clementine Ford put forward the controversial view in her first agony aunt column for Yahoo 7, as she responded to one concerned mother’s reaction to her father-in-law offering to blow bubbles for her daughter in return for the hug.

The unnamed mum reached out to the columnist for advice, explaining that she was “furious” he tried to “bribe” her daughter.

“I heard him say ‘I’ll blow you more bubbles if you give me a hug’,” she wrote. “I am furious that he tried to bribe my child with something she really wanted for her affection. I said, ‘we don’t negotiate for hugs’.

“How can I best advocate for my daughter in these situations when all I want to do is come down on other people like a tonne of bricks for perpetuating a culture where women feel they owe men/people affection, that their affection is a favour that can be bought?”

The worried mum continued by explaining how she was trying to teach her child about consent and that “her body is hers” and that “no one can ask from her and her body.”

In a lengthy response, Ford agreed with the mother insisting she wasn’t overreacting, while also commending her for wanting to set an example for her daughter.

The writer said being a child is “hugely disempowering” and that children who attempted to enforce boundaries with adults when it comes to physical contact were not taken seriously.

“We grimace and bear our way through it, learning bit by bit that the preservation of more senior egos is more important than our own feelings of safety and well being,” she replied to the mum.

“Is it any wonder the #MeToo movement has unearthed so many stories of women manipulated or trapped into activity they don’t remember consenting to but felt ill-prepared to stop?”

Ford continued by offering some words of advice and support for the mother, including sitting down for a chat with family members to explain her stance on consent and women being in control of their bodies.

The columnist also told the mum to mention statistics regarding sexual assault against women in Australia and how important it is to teach children about protecting their bodies.

Many praised Ford for her words on the issue, with one writing on Facebook: “Clementine, Thank you so much for writing this. I’m always felt really strongly about this and have often been dismissed as being too much or even of teaching my daughter bad manners. So relieved that I’m not alone. Thank you x.”

While another added: “This is a great article. All for body autonomy for everyone,” and one wrote: “So well written, and so exactly on point with many conversations I have tried to have with extended family (only to be vilified for it). But worth every patronising comment because from 2 years old my oldest daughter was already asserting herself with phrases like “it’s my body” and “no, I’m the boss of my body”. My own little mini hardline feminist! #proudmum.”

However others thought her response was a step too far, with one appearing to sarcastically comment: “So sad that grandpas still think it’s ok to ask for hugs while they’re playing with their granddaughters. You’re never too old to be a sexual predator!”

Ford replied however, saying: “You’re trying to be a d***, but the truth is that little children are more at risk of being abused by family members than they are strangers.”

Meanwhile, according to the Mail Online, one more commented: “Boys often hate kissing their mothers when they reach adolescence, or younger. Are mums meant to back off because they’re now seeking unwanted physical favours?”

Do you agree with Clementine Ford that the grandad’s actions were inappropriate? Or do you think she is overreacting to the mum’s situation?