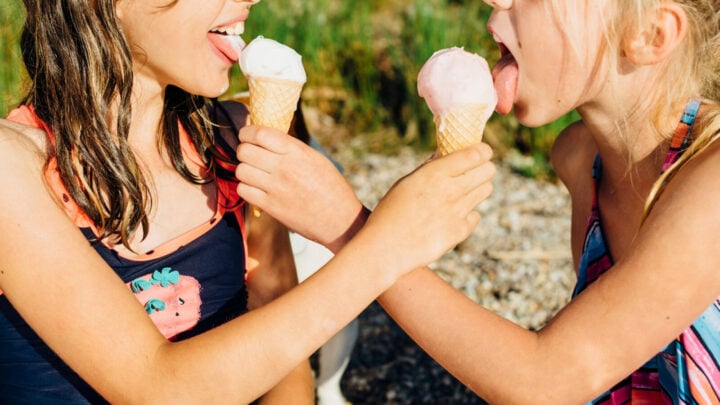 A grandma has shared her concerns about grandkids sharing germs at mealtimes, but is she overreacting? Source: Getty

Kids share everything, including germs, but one concerned grandma is worried about her grandkids sharing cutlery and cups, with some saying it’s more of an issue of bad table manners than bad hygiene, while others say it’s just kids being kids.

The grandma took to the online Gransnet forum asking how other readers felt about “siblings using the same spoon and cup at the same time”.

“My daughter lets her two daughters eat and drink from the same cup and cutlery at the same time,” she wrote. “I suggested to her that it would be better if they had their own for each meal.”

The grandma continued to say that her daughter didn’t seem to see the issue, asking readers if this was just the way “they parent these days”.

“My daughter replies by saying it’s only family germs, but they seem to pass colds and sniffles to each other!” the grandma wrote. “Does anyone have any suggestions [on]  how I can make her see my concerns, or is this the way they parent these days?”

Most people said the woman was overreacting, saying that children share germs on everything they touch, so sharing cutlery was hardly a concern. Others said it was possibly the mum’s way of avoiding a “meltdown” and said they’d grow out of it.

“It is none of your business,” one wrote, adding “Your daughter is super busy with two kids under three, this is a blip in her radar. I am sure that the kids share toys, so germs are everywhere. Using separate cutlery won’t make much of a difference.”

“Children that age usually want whatever the other ones got – the red/blue cup/whatever. Maybe it’s a way of avoiding a meltdown. I’m sure they won’t be doing it in a few years time,” one commented.

“TBH (to be honest), at their age I don’t see it as a problem,” another said. “Coughs and colds are readily passed around families, especially at this age and separate cutlery etc. won’t change that. It’s not a case of  ‘the way they parent these days’; this is your daughter and grandchildren you’re talking about! You raised your children the way it suited you-your daughter is raising her children the way it suits her. Neither way is right or wrong. Personally, I think you should be less critical and more supportive. Parenting is tough without criticism from family members.”

Others said the habit was more an issue of “table manners”.

“I wouldn’t be worried about hygiene, I doubt they will catch anything deadly from each other, ” one said, adding “It is just the negative effect on the children if others see them doing it outside their own home.”

The grandma wasn’t alone though, with several siding with her concerns over germs, especially the “dreaded covid”.

“Can’t be too careful though these days – what if one had caught the dreaded covid bug at nursery perhaps? She wouldn’t want it passing to youngest, would she?” one worried, adding “This could make her lax in other ways also. Isn’t how kids learn about ‘proper’ grown up eating, by having their own plates, bowls, cutlery, cups etc? If it was just a plate of sandwiches maybe yes, as they could take what they wanted, but proper meals, then no. Seems odd.”

What do you think? Should the grandkids have their own cutlery and cups?