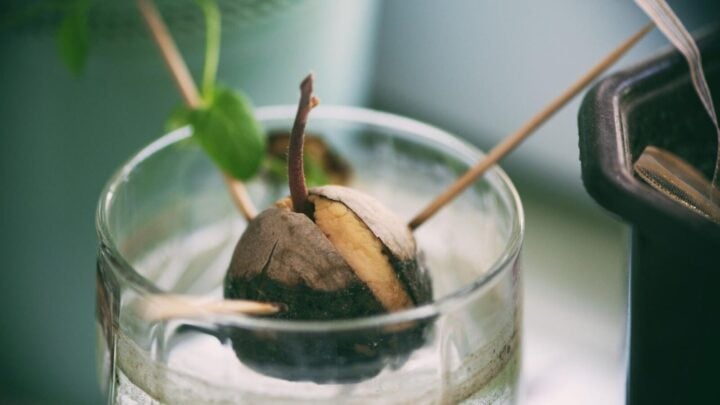 You wouldn't believe how easy it is to fill your house with beautiful avocado plants! Source: Getty.

Avocados are a hot commodity in most households and many Aussies burn through them like there’s no tomorrow. But what if someone told you that instead of throwing away the seed in the middle, you could actually score a free, low-maintenance plant from it?

Well, Aussie plant-fanatic Brad Canning from Melbourne shared a quick one minute snippet on the video sharing app TikTok, revealing just how easy it actually is to repurpose an avocado seed and grow a fresh and subtle indoor house plant.

Brad said he was obsessed with the gardening hack thanks to how quick it is to set up and how fast the growing process is. In fact, after three to four months, they grow to become tall and sleek plants with gorgeous large leaves that could easily bring life to any kitchen counter or corner space.

It’s worth noting however that you shouldn’t go into this expecting to grow your own avocados. The skinny plant you’ll be growing from a simple avocado seed is unlikely to ever bear a load of fruit, if it even fruits at all.

In fact, when starting from a seed, avocado trees can take anywhere from five to 13 years before the tree starts to fruit. So, although you can definitely avoid waiting with bated breath for free fruit to appear, you can instead enjoy a few extra plants around the household!

Brad says that getting the seed started is as easy as removing it from the avocado (he suggests using a fork as it’s a bit easier) and then running the seed under the tap to remove the remnants. Pat it dry with a towel and then use your fingers to peel off the skin to ensure it doesn’t go mouldy when it’s being stored for growth.

To allow the seed to germinate and grow a root, you then wet a paper towel and squeeze out the excess so it’s damp but not soaking wet. Wrap the paper towel around the seed before placing it in a ziplock bag to boost the humidity.

He then says to store it away for about two to three weeks before removing them from their bags. You’ll see the seeds have started to crack and a root will become exposed. Pop the root in water and it’ll start to sprout!

It’s important to remember however that you only make sure the roots or half the seed is placed in the water for healthy growth. You can do this by using a vase that stops the seed from falling in or by sticking toothpicks in the seed to allow it to just float on top of the water. Once the plant has grown to a nice size, you can then pot it in soil or keep it in the vase to continue its growth!

Commenters shared their excitement for the gardening hack with one writing: “Finally a good tutorial! So excited to attempt this.” While another added they would prefer to keep theirs in the water next time around as they wrote: “I had 27 going at one point in time, so addicting but when they are planted they are so temperamental.”

Have you tried this before? What's your favourite gardening hack?