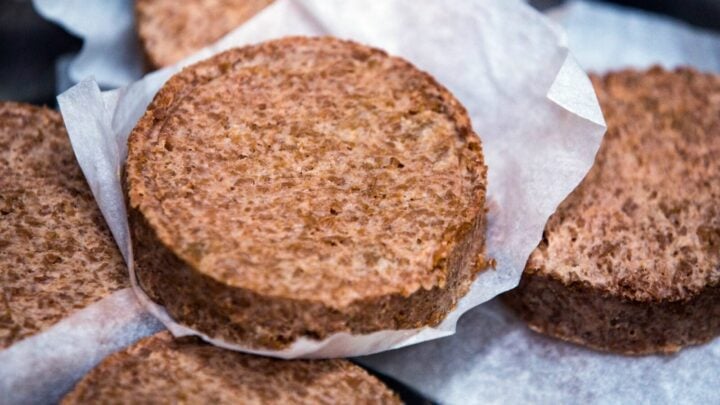 Plant-based meats like burger patties that look and taste like the real thing are becoming more popular. Source: Getty.

Plant-based meat options are becoming more and more popular on menus across the country as big food chains are now offering up plant-based alternatives for popular meat dishes.

For example, plant-based ham, pepperoni and beef are now on the menu at Domino’s Pizza. That’s right, vegans, vegetarians and even health-conscious meat-eaters alike can now enjoy some of Domino’s most popular pizza toppings, which include Hawaiian, Ham and Cheese, Supreme and everyone’s favourite, Pepperoni!

“We went through 27 different variations before we developed a product we were 100 per cent happy with and knew our customers would love,” the spokesperson said.

And not to forget, Domino’s first crack at plant-based toppings last year saw more than 50 per cent of stores sell out of plant-based beef within the first two weeks of launching.

“Introducing iconic toppings such as ham and pepperoni to our plant-based range means our customers have more choice than ever before,” he said at the time. “We are proud of our new plant-based toppings, which are made in Australia especially for Domino’s, and are just as tasty and affordable as the real deal.”

The move to plant-based alternatives got us thinking about whether meatless options are, in fact, healthier for you. Well, according to a new report released by think tank Food Frontier last week, fake meat options have much less saturated fat, more protein and lower or similar kilojoules and sodium. They are also a source of dietary fibre — important for keeping the gut healthy.

“Quite often they’re lower in fat — particularly saturated fat (with a few exceptions),” Dynan said. “And a number have added fibre, which you won’t get from meat.”

And if you wondering what ingredients usually make up plant-based meat alternatives, according to Choice, some of the more common ingredients include vegetable protein from soy, pea, wheat or rice, vegetable oil such as coconut or canola, salt, starch from potato, tapioca, corn or maize, thickener, yeast, mushroom and other vegetable powders, natural colour, often from beetroot, and natural flavour.

Have you tried plant-based meat alternatives before?