Did the wrong act make it? Shock act earns spot in Australia’s Got Talent finals 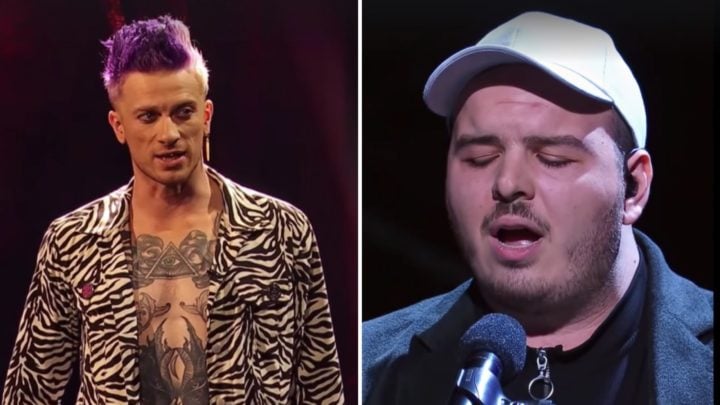 Knife thrower Captain Ruin (left) made it through to the Australia's Got Talent grand final, while blind singer Paul Kapeleris didn't make the cut. Source: Facebook.com/GotTalentAU

Some fans of Australia’s Got Talent aren’t happy with the results of Sunday’s semi-final, which saw knife thrower Captain Ruin and kid dance crew Lil Kookies progress through to the grand final. The shock result meant acts who have been favourites with audiences such as blind singer Paul Kapeleris – who earned a Golden Buzzer with his original audition – haven’t made it to the grand final.

The Australia’s Got Talent judges Shane Jacobson, Lucy Durack, Nicole Scherzinger and Manu Feildel were joined by guest judge and comedian Joel Creasey for the second round of the semi-finals, where they were entertained by singers, dancers and comedians. At this part of the competition, the guest judge gets to hit the Golden Buzzer once to send an act straight through to the grand final, while the original judges pick the remaining act.

Captain Ruin took to the stage with a stunt that he said was inspired by his love of the Looney Tunes cartoon characters. During the death-defying act, he threw knives at an ever-shrinking swinging target. If he missed, an overhead piano would fall onto him and crush him to death.

“I am Captain Ruin, he’s not a different part of me,” the act told the judges. “It’s all part of the complicated tangle of what makes any person unique.”

He added: “This is incredibly dangerous. I’m definitely putting my life on the line to make it through to the grand final.”

The judges were impressed, with Manu calling the act “talent” and declaring that he loved it. Shane congratulated Captain Ruin on the inventiveness of his performance and also said he loved the performance, but it was Joel who thought Captain Ruin was worthy of a spot on the final. He explained: “Look, when you were describing your act at first I was like ughhh, magic and stunts, not my favourite thing.

“But then as the act went on I got more and more invested. Last time you risked your assistant’s life, this week you risked your own life. I am interested in what you could do next. This goes against every fibre of my being but I do think you could be Australia’s winner.”

The other judges looked shocked by the decision, while viewers at home vented their frustration that Captain Ruin’s place in the final meant other acts didn’t get a change. One person on Facebook said: “AAAAND Joel comes in and destroys what had been a great series so far. What a shame that a very talented artist will miss their chance due to his ridiculous decision!!”

Another comment read: “He’s good, but it wasn’t a golden buzzer performance. Paul’s performance was worthy of it!,” while a third added: “If the audience was voting the knife thrower would not have got in. Paul’s act was very moving.”

Meanwhile, child dance crew Lil Kookies were the second act to make it through to the final. Aged between 11 and 14, the crew said they wanted to follow in the footsteps of their older brothers and sisters, Kookies n Kream, who made the Australia’s Got Talent final in 2012.

With an incredible performance to ‘Kiss the Sky’ by Cash Cash, the crew did enough to progress in the competition, with Nicole saying: “You guys just slayed that performance! You might be little but you pack a big ole punch. Oh my gosh you guys are my new favourite little treat, seriously.”

Manu was also impressed and told the children he wanted to “see more”, while Shane said that they brought their a-game and made the competition tough for the other acts.

Of course, it was Paul Kapeleris fans were really hoping would get through to the finals. He originally wowed audiences during the first week of the show when he took to the stage with an incredible version of Andra Day’s ‘Rise Up’. Paul, who is also blind, brought the entire audience to their feet and left the judges in tears with his moving performance.

His audition was so impressive that judge Lucy Durack gave him her Golden Buzzer, telling the singer: “You have such a magnificent voice but you sing with such honesty and heart.” Despite an incredible rendition of ‘Yesterday’ by the Beatles on Sunday’s show, it wasn’t enough to earn Paul a spot in the final.

Still, fans praised Paul for his performance and flooded Facebook with well-wishes. One person said: “I’d buy his album. Paul I hope you are given the opportunity to record your beautiful voice.”

Another said: “Beautiful! That was the Gold Buzzer Joel should of given,” while a third added: “Keep going, your talent is unique. Love you.”

Lil Kookies and Captain Ruin now join Olina Loau and contemporary dancer Sienna Osborne in the grand final. The next round of the semi-finals continues on Monday night.

Australia’s Got Talent airs Sundays at 7:00pm on Channel 7 and Mondays at 7:30pm.

What did you think of the acts who got through? Were they worthy?