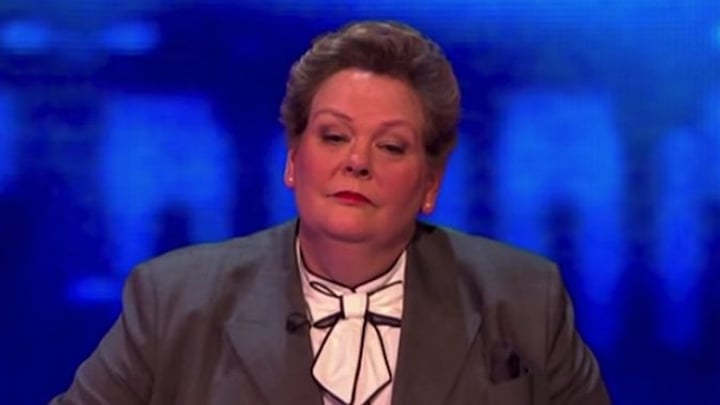 Anne Hegerty is 'The Governess' on the show. Source: YouTube/The Chase.

The Chase star Anne Hegerty is known for her severe on-screen character as The Governess, continuously slamming contestants down with her harsh comebacks and quick answers. But now she has revealed she often has to “bluff it”, and sometimes even “panics” when she’s asked a tricky question.

The 59-year-old star has shared some of the show’s strict backstage secrets in an exclusive chat with Starts at 60, revealing which lines are scripted in advance, how each Chaser needs their own personal escort to stay hidden, and what really goes on behind-the-scenes once the cameras stop rolling.

Hegerty explained she doesn’t usually suffer with nerves while filming, having starred in a few TV quiz shows in the past, but she has a constant fear that one day she’ll be “found out”, and not be able to answer a basic question she should have researched in advance. Gaining most of her knowledge from reading, she relies on decades of experience – but, she pointed out, even the experts are caught out now and again.

“I just try to look like I know everything,” she told us. “There are a great many times that I’m actually panicking inside. Every single time I think ‘this is the time I’ll be found out, they’ll ask me a question that I should know, and I’ve been bunking off and will be made to look an idiot’.”

In fact, she revealed all of The Chasers are forced to “act” at certain times, to keep their ‘unbeatable’ personas in place. She added: “I try my best not to give it away. In reality, there are so many things we don’t know, we often bluff it. It’s acting, it’s about looking calm and getting some lines ready in my head to explain why I thought it was this.”

The quiz show grew in popularity in Britain after first airing in 2010, and it has since debuted in Australia – with both shows hugely popular with a worldwide audience. And while some of the hilarious one-liners seem too good to be true, it seems they’re really not – and a lot of the show is unscripted.

Hegerty told us the main parts of the show that are planned in advance are their opening lines, “at the top of each head to head”, and a few of host Bradley Walsh’s autocues.

Explaining how it works, she told us: “The guy who writes for us will produce about four lines for each contestant, and we decide which to use. Quite often mine aren’t allowed!”

However, there are much stricter rules when it comes to life backstage. Hegerty said each Chaser has to go into hiding, to ensure they don’t run into a contestant before they appear on the show – in order to keep an element of “mystique”. They are given a personal escort if they need to leave their dressing room, and she joked: “There’s a lot of flattening yourself against the wall and peering round corners!”

The day-to-day running of the show, meanwhile, is fairly down to earth and simple. Hegerty said she’s given a parking pass so she can drive straight to the studio, before spending “around an hour” in her dressing room which, she joked, is “mostly for the hair”.

The Chaser Producer then runs each of the experts through some questions as a warm up, to get the pace up – while ensuring they’re unrelated to what they’ll be asked on the main show. Once in place by the main door, she said: “I get shown something about the contestants, their pictures, names, ages and occupations. I can also watch a monitor of them so I can think ‘OK this one’s going to be the threat, this one will be a bunny and doesn’t matter’.”

Each show takes around two hours to film, with minimal stops between takes, and Hegerty explained the most tense part is often stepping out for the first time – as she tries to remember the necessary details about her opponent. Running us through her routine at this point, she explained: “What I’m thinking as I’m stood on the steps ready to go out is ‘OK, these are the lines I’ll use, these are the two figures, and this is the person’s name. Sometimes Brad can be stood in front of the name, and then I can’t remember it! So now I run through it in my head.”

The Governess is known for wearing harsh grey and black suits, with high-necked shirts and ties during many of her appearances, but she insisted it couldn’t be further from her style away from the show. In fact, she admitted, she doesn’t like it at all.

Read more: The Chase’s ‘Governess’ and ‘Destroyer’ reveal how to win the show

“It’s dramatically different,” she added. “I’m not someone who goes round looking like that! I’d describe my own look as ‘dishevelled rock chick’! It’s just a top, trousers, boots, jacket and scarf. My look on the show matches my character, do I like it? No! I’m hoping they’ll loosen up a bit.”

While there’s undoubtedly competition between each of The Chasers too, their friendship backstage is clear for anyone to see. And Hegerty had nothing but good things to say about her colleagues.

Giving viewers a clue as to who could be the biggest challenge, she said: “Paul is the best quizzer, he scores highest. Mark is the fastest, if you’re going to score a 24, the one you don’t want to be facing is Mark, he has the best chance of hunting you down. Jenny is also very fast, and she’s tremendous at low-brow popular culture. Shaun is one of the best football quizzers in the world. He’s taken apparent football experts to pieces.”

Are you a fan of the show? Who is your favourite Chaser?