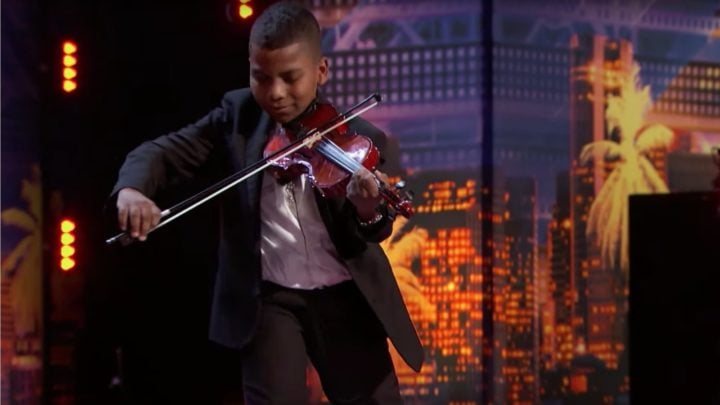 Andre Rieu has inspired millions of people around the world with his tear-jerking music and an 11-year-old contestant on America’s Got Talent could soon follow in his footsteps.

Tyler Butler-Figueroa appeared on a recent episode of the popular reality show and impressed the judges and fans around the globe with his incredible performance.

With his violin in hand, Tyler explained to judges Simon Cowell, Julianne Hough, Gabrielle Union and Howie Mandel that he started playing when he was seven after he was bullied at school. Shockingly, Tyler revealed he had cancer and that the disease almost killed him. He also explained this was the reason the other kids made fun of him.

He’d originally been diagnosed with leukaemia when he was four, which his mother described as the worst day of her life. He underwent chemotherapy and the other children at school would tease him because he lost his care during the treatment.

“They would spread rumours to say my cancer was contagious and they all wanted to stay away from me,” the North Carolina local said.

Playing the violin was an escape for Tyler and he said that he didn’t just want to be known as the kid who has cancer.

“We’re all rooting for you,” Julianne told the contestant before he performed Kelly Clarkson’s ‘Stronger (What Doesn’t Kill You)’ on the violin.

The crowd clapped along as Tyler enthusiastically played his instrument. Simon’s jaw dropped in disbelief and all four judges gave the young contestant a standing ovation. Meanwhile, his mother burst into tears backstage.

“I just want to commend you for taking something that’s probably been one of the hardest things you’ll ever have to go through and turning it around and finding something that brings you joy,” Julianne said.

Tyler had tears in his eyes and told the judges he was feeling proud of himself. He also confirmed that he’s been in remission for four years.

“You are an extraordinary young man,” Simon continued. “We hear too many stories about people being bullied, but I can tell you one thing: Most people are bullied because they’re better than the people who bully them. You have such an amazing talent, such a personality and I would like to say something on your behalf to the bullies.”

Simon then pressed the Golden Buzzer. It now means Tyler is through to the live shows. Tyler’s mum ran on stage as gold confetti showered her son. Simon also joined the contestant on stage and gave him and his mother a huge cuddle.

“You enjoy every moment,” Simon told the young performer.

Viewers at home were also impressed with the performance and praised Tyler online.

One person on YouTube said: “This audition brought me so much joy and appreciation of life. You are amazing.”

Another comment read: “ok I cried- I will never complain about anything else in my life.”

A third added: “That performance was so powerful! I haven’t had happy tears in quite some time now! Thank you for that! Congratulations Tyler!”

What did you think of the performance? Have you ever been through anything like Tyler has?