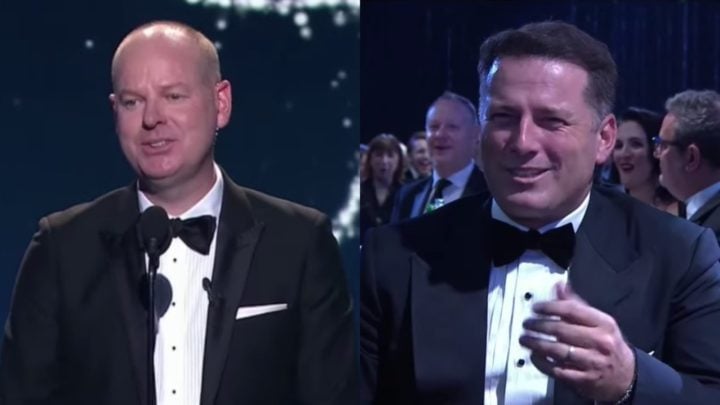 Tom Gleeson targeted Karl Stefanovic in his opening speech at the Logie Awards in the Gold Coast on Sunday night. Source: YouTube/ Channel 9

Karl Stefanovic may have stepped out of the spotlight somewhat since his departure from the Today show but that didn’t stop the presenter from being in the firing line of some shocking comments on Sunday at the 61st annual Logie Awards.

The former Today show host was savagely roasted in a hilarious, yet shocking speech by Gold Logie winner, comedian Tom Gleeson as he opened the night’s proceedings in the Gold Coast.

While the stunning frocks certainly caught the attention of onlookers, it was the comedian’s humorous remarks about Stefanovic that have garnered much attention.

Taking to the stage to address the room packed of television stars Gleeson began: “I think the reason they (the Logies) ask you to do the opening is because Channel Nine has run out of stars.

“Congratulations to Marred at First Sight by the way for their monster ratings,” he continued. “Give them a huge round of applause

“Channel Nine were happy to cash in on your ratings by showing off your tacky weddings and fired Karl Stefanovic for having one!”

Knight was welcomed to the show earlier this year after Stefanovic’s shock departure, joining Gardner on the panel.

“Karl, Today Show needs you,”Gleeson said.  “I was on the Today Show the other day to promote the Logies. The ratings are so low I felt like I was keeping a secret!”

However, Georgiadis did not go home empty handed, winning the Most Popular Presenter award for his role on Gardening Australia.

Did you watch the Logie Awards on Sunday night? Who did you think was going to win the Gold Logie?