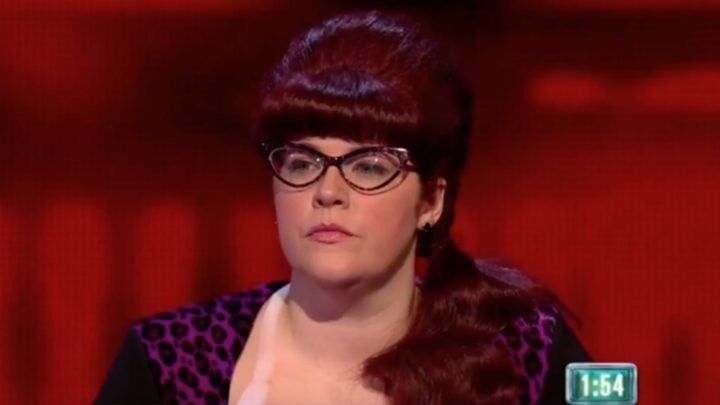 Jenny 'The Vixen' Ryan is known for her dramatic gasses and huge red hair on The Chase. Source: YouTube/Joshua lever.

She’s known for her thick rimmed glasses and huge red hair on The Chase, but Jenny Ryan underwent a dramatic transformation for her performance on UK talent show The X Factor on Saturday night – and she looked amazing.

The Chaser, nicknamed ‘The Vixen’ on the UK version of the game show, was initially booted off the singing competition by one of the judges. However, she made an incredible comeback and wowed the crowd with a powerful performance in the first round of live shows.

And the star looked almost unrecognisable as she aptly sang ‘Rise Like A Phoenix’, ditching her signature glasses and wearing her hair tied tightly back in an elegant up do. But it was her dazzling dress that really wowed the crowd, with the Chaser swapping her more stern looks for a floor-length flowing silver number.

She impressed all four judges and went through to the next round, with Nicole Scherzinger – who originally kicked her off the show – saying: “You’re like a sexy vixen and your vocals just soared, that’s why I am giving you my safe seat.”

Simon Cowell then joked: “Jenny, I tried to keep you in the competition. It was these two that kicked you out!”

Fans rushed to share their amazement at Jenny’s new look online, with many saying she looked “unrecognisable”. One person commented: “She went from the vixen to Jenny from the block!” while another added: ”

Meanwhile one person even called for her to record the next James Bond theme tune, writing: “If the Bond producers are looking for an artist to record Daniel Craig’s swansong to the series then look no further than the incredible Jenny Ryan.” Another agreed, adding: “Jenny Ryan NEEDS to do the next Bond theme!!”

Despite being inundated with support from viewers at home following her first audition on the X Factor, Jenny was later eliminated from the show by Scherzinger – a decision she’s since admitted left her in tears. It sparked a huge outcry from the public, with many slamming the decision and insisting she was the best in her category.

Clearly not happy with the decision, X Factor boss Simon personally called her to invite her back on the show. Speaking on UK chat show This Morning shortly after, Jenny said of the moment she was eliminated: “I came home, cried a little bit, ate quite a lot of ice-cream… Then I got a phone call after what felt like the longest time, it was quite a wait, and I got a call from Simon inviting me to come back.”

She added: “I was not expecting that level of support from the public. After my first audition, the flood of comments I got on social media was overwhelming.

“It was so uplifting and so wonderful. I have to say thank you who took the time to write in and make their feelings known. That wave of affection and admiration is enough to lift anybody.”

The initial decision to boot Jenny off the show sparked outrage on Twitter, with one person commenting: “Absolutely barbaric that Jenny Ryan didn’t get through on X Factor. She’s incredible and what the hell. Ridiculous. Standing ovation but not good enough for live shows??”

I was DEVASTATED that the judges didn't put me through, but the tidal wave of love & support I got from you all was incredibly uplifting, I am SO grateful. I'm thrilled to have been thrown this lifeline, I won't let you down. See you at the Lives on Saturday! #XFactorCelebrity pic.twitter.com/mV0Aoxpp0M

Another added: “Some extremely bad decisions last night. Sending Jenny Ryan home – the worst one – amazing range, fantastic voice. One of the few people to own a Queen song. You want a celeb with the X FACTOR? Why send the one person home that has it?? Total joke.”

Jenny later responded to the support after getting that all important call, writing on social media: “I was DEVASTATED that the judges didn’t put me through, but the tidal wave of love & support I got from you all was incredibly uplifting, I am SO grateful. I’m thrilled to have been thrown this lifeline, I won’t let you down. See you at the Lives on Saturday!”