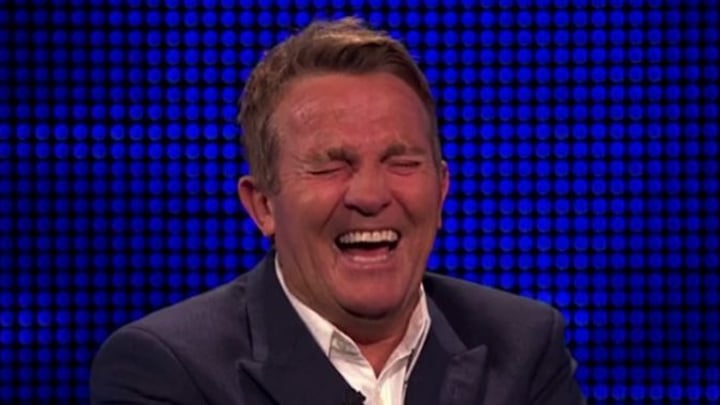 Bradley Walsh was in hysterics at the answer option. Source: YouTube/The Chase.

He’s known for his spontaneous fits of giggles on The Chase, and UK host Bradley Walsh had one of his most hilarious reactions to a question yet on the latest episode.

The 58-year-old TV presenter — who hosts the UK version of the show, which also runs in Australia — was left struggling to speak after seeing the three answers pop up on his screen and realising he’d have to read out an X-rated third option to stern Chaser Anne Hegerty and the contestant.

The question was: “In 2017, aerialist Erendira Wallenda set a record by dangling from a helicopter over the Niagara Falls by her what?”

While it seemed innocent enough, the answer options were anything but, as they read: “Teeth, thumbs, knicker elastic.”

Just about managing to finish reading them all out, Bradley had tears in his eyes as he fought back hysterical laughter, eventually saying: “It just begs the question what for? Why? That’s a funny old conversation at breakfast ‘guess what I am going to do today, I’m going to dangle myself over the Niagara Falls by my teeth!'”

The contestant chose teeth as his answer which set Walsh off once again as he burst into another fit of giggles. Surprisingly though, it ended up being the right answer.

It delighted fans at home as they reacted to the funny scenes. One wrote: “Bradley Walsh when on one of his laughing sessions makes me laugh even more #TheChase.”

The UK host is known for his hilarious reactions and just weeks ago he was given the important task of asking contestant Charles a question about marine life.

“Which if these is not a genuine species of starfish,” he asked.

The contestant had the choice of the goose foot starfish, the red-knobbed starfish or the chocolate starfish. Bradley managed to get the first two possible answers out, but struggled when it came to saying “chocolate starfish” aloud.

He began giggling, before keeling over laughing at the answer – which has very rude connotations. The audience then began to laugh and Bradley completely lost it when he looked up at Anne, who was shaking as she tried to control her laughter.

The contestant ended up picking chocolate starfish as his answer, which set the host off even further.

“What made you put that?” he laughed. Charles, who was also laughing, had a hilarious response for Bradley.

“Funnily enough, it’s the only starfish I’ve heard of,” he said. It turned out the answer was correct.

Are you a fan of The Chase? What is your favourite Chase moment?