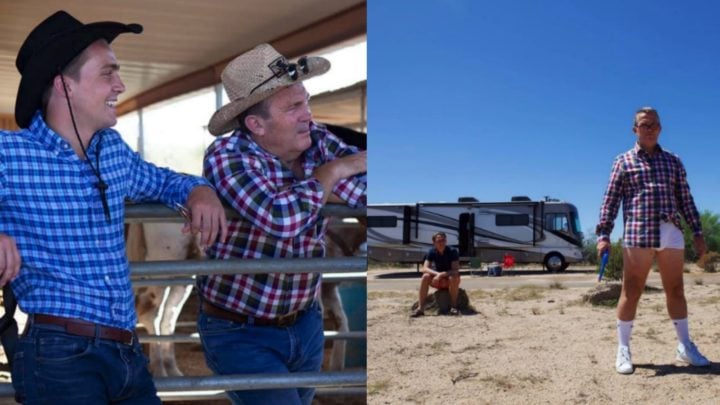 Bradley Walsh and his son star on the show together. Source: Facebook/ITV (left) and Instagram/Bradley Walsh.

He’s known for his hilarious one-liners and fits of laughter on the UK version of The Chase and now host Bradley Walsh is once again leaving fans in hysterics in a new TV show alongside his lookalike son.

The 58-year-old stars in ITV’s four-part series Breaking Dad, which sees his son Barney, 20, challenge him to a series of extreme challenges from skydiving and water skiing, to transforming into a cowboy and even frying eggs on the street.

Viewers across the UK have been busy sharing clips of some of the highlights online as the pair continue to face their demons on the show, which first kicked off in the New Year.

The show follows their progress as they travel over 2,000 miles from Los Angeles to New Orleans, but while Bradley’s ideal holiday is lying on a beach sipping a cocktail, his son prefers a more action-packed itinerary — and he is the one in charge on this occasion.

Videos taken from the first episode show the pair collect their enormous 36-foot, 7.5 tonne RV in LA to take on the trip.

“Have I really got to drive this? How am I going to get it out of here? It’s like driving a block of flats!” Bradley tells his son, before clips from the show reveal the moment he attempts to steer the huge vehicle between lanes on busy motorways — appearing terrified throughout.

They go on to skydive together for the first time, with Bradley attempting to bottle out of the experience from the moment he arrives on the airfield. Luckily, Barney talks him round and ITV were quick to poke fun at his misfortune as the network shared a video online and directed it to his Chase co-stars, writing: “This video is for every Chaser who Brad has wound up over the years…”

From there, the pair dress as cowboys in the middle of nowhere, try water skiing and even stop on the side of the road to attempt to fry eggs in the searing heat.

One incredible clip, shared by ITV on social media, shows them try to find a clean area of ground to drop their egg before standing back to watch it do absolutely nothing – all while wearing near-matching outfits to further highlight the similarities between them.

The entire show has been praised by fans online, with many calling it “comedy gold”. One viewer wrote on Twitter: “Absolute comedy gold, I was in hysterics within minutes and could have sat there all night! Roll on the next episode…”

Meanwhile another wrote: “Absolutely loving @BradleyWalsh and Barney together on @ITV #breakingdad fantastic!”

And another added: “Ok so #BradleyWalsh is my new crush #BreakingDad.”

Several other viewers also praised Bradley’s close relationship with his son, with one adding: “So entertaining you boys are a breath of fresh air…great to watch father and son perfect relationship.”

There’s no word yet on when the show will air in Australia.

Are you a fan of Bradley Walsh on UK’s The Chase? Have you ever tried any of these extreme activities?