The untold story behind ‘Lion’: Sue Brierley opens up on adopting Saroo 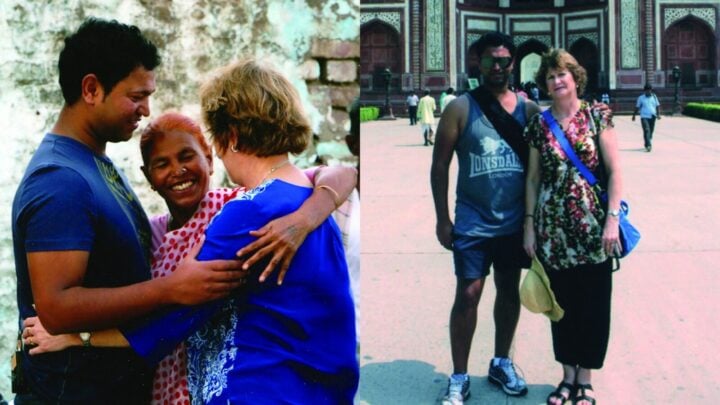 Sue Brierley pictured in India alongside her son Saroo and his biological mother Fatima. Source: Supplied.

Sue Brierley was propelled into the public eye after her adoptive son Saroo’s autobiography A Long Way Home was made into a major film. The heartfelt drama Lion — which told the story of how Saroo became lost at the age of five in India, was subsequently adopted by Sue and her husband John, and at the age of 30 tracked down his birth mother using Google Earth — became an Australian box office success and won multiple awards, but most importantly, won the hearts of people all over the world.

Now, Sue, 66, has written her own autobiography Lioness, which hit bookstands this week, detailing her own traumatic childhood as the daughter of WWII refugees from Hungary and Poland, and how it shaped her view of motherhood and adoption.

Sue didn’t grow up in a ‘normal’ household. Her father, Josef ran a giant wrecking yard from their home in north-west Tasmania — which consisted of rusting car shells, engine parts and tyres. Despite her father’s success (although this didn’t last), he was not a good provider, so Sue, her two sisters Maria and Christine, and late mother Julie lived off rations. In her book, Sue described her early years as very isolating and depressing.

“My story, my early years were the foundation of my decision,” she tells Starts at 60, adding her decision to adopt Saroo, and some years later Mantosh, was also inspired by a vision she’d had at age 12 in which she saw a brown-skinned child walking towards her.

“I didn’t realise [what it meant] at the time, but… [the vision] gave me hope that there was a direction, there was a purpose and that was the start of it,” she recalls.

Four years later, Sue met her now-husband John and the pair married a year later and moved to Hobart, Tasmania, with plans of someday adopting. Even though they could have biological children, Sue and John believed adoption gave them a greater capacity to accomplish good. But, due to government hurdles, it was another 16 years before Sue and John met Saroo at the airport in Melbourne.

“It was love at first sight”, Sue wrote in her book. “It really was just like that,” she recalls. “I mean, I sort of compare it [to], even though I have absolutely no experience of it, but I presume that when a mother is giving birth to a child that’s longed for and loved whilst growing within her, she must have this incredible surge of love when she finally lays eyes on her infant.

“But boy, what was there not to love?! He was seriously gorgeous, [but] he was also very vulnerable, which straight away you just… well you want to protect, it just really kicked in, it was pretty special.”

Speaking of the moment she met Saroo’s biological mother Fatima, Sue said: “It was an absolute miracle. To be there was fabulous. I can take myself back to the feeling in every way; the sights, the smells, the sounds, the feel of the dirt on my feet and just every part of it, it’s now a part of me and I value it very highly.”

Sue travelled to Saroo’s hometown of Khandwa as part of a 60 Minutes segment, which aired in 2013, the same year his memoir was published. While Sue hasn’t been back to visit since, she says Saroo has been back multiple times.

“I’m pleased that he does that,” she says. “And as he should. I think it’s really important to be still connected with your past.”

As for what Saroo has been up to these days, she says before Covid he was busy working as a keynote speaker all over the world while living with his girlfriend in Spain. He’s now in Australia for her book launch but has plans to return to Europe once travel is permitted.

Asked whether her other adoptive son Mantosh has plans on reconnecting with his biological family, Sue responded with: “I think you know he’s just being totally accepting of his life now, he just you know, a day for him, is the day he’s living, he’s not really looking back to the past and particularly because his story of the past isn’t as good.”

The adoption process when it came to Mantosh was anything but easy. While Sue and John waited nearly 16 years before they could apply to adopt, by the time they lodged their paperwork and interest in adopting a young boy or girl from India, it only took a couple of months before they had Saroo in their arms. It was a different story when it came to Mantosh — the whole process took over two years. And while Mantosh had originally been residing at safe haven Nava Jeevan, the same place where Saroo had been staying, during the two year delay he was moved to government-run institution Liluah Children’s Home, which had a reputation for child abuse. By the time they met Mantosh in November 1991 (four years after they first adopted Saroo), according to Sue’s book, “he was a shell of the bright, happy boy he had been months before”.

Because of this, it wasn’t as easy for Mantosh to adjust to his new life in Hobart, and it certainly wasn’t smooth sailing for Sue and her family either. Mantosh’s radical behaviour eventually took a toll on Sue’s health. “I had to bend here and there, and at times nearly didn’t pull it off … but I did in the end,” she recalls.

While Mantosh is still battling the same demons all these years later, Sue reckons he’s doing much better.

“He’s got a successful relationship with his partner of three years [and] he’s still working in our business,” she says. “He’s got a few health issues from the past, but overall, he’s very affectionate, caring and loving.

“Just of late, you know, because I don’t see a lot of Saroo these days, you know Mannie said to me ‘Don’t worry mum, I’ll always look after you’ and I just thought it was such a heartfelt comment and it just popped out of his mouth so naturally.”

Have you watched the movie 'Lion'?