Millionaire performer Sir Bruce Forsyth leaves kids nothing in will 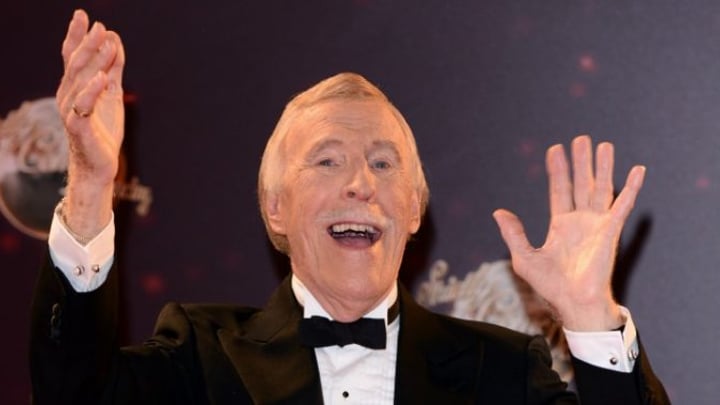 According to reports, Sir Bruce Forsyth left nothing for his children in his will. Source: Getty

He was one of Britain’s favourite entertainers but it looks like Sir Bruce Forsyth may not have left his millions to his children after he died.

The showbiz legend passed away last August, but details about his will and what happened to his vast fortune have just come to light. The star reportedly left his entire £11.5 million (AU$20.46 million, US$15.4 million) to his beloved wife, Wilnelia.

While it would make her happy, Mail on Sunday in the United Kingdom reported that Forysth’s children didn’t inherit a single cent of his fortune. According to the report, it was the Strictly Come Dancing star’s way of avoiding tax. In the United Kingdom, money passed from a husband to a widow is not subject to inheritance tax, but money passed from a parent to a child is.

In addition to the money left for Wilnelia, Mail on Sunday reports the entertainer left £100,000 in a trust fund to split between his nine grandchildren when they turn 21, as well as £20,000 for the two executors of his estate.

This meant nothing was left to daughters Debbie, Laura and Julie, who Forsyth fathered in his first marriage to Penny Calvert. Meanwhile, his daughters Louisa and Charlotte from his second marriage to Anthea Redfern also failed to be included in the will. His son Jonathan, from his third marriage, also failed to inherit anything.

It’s not the first time a will has made headlines in recent times. A New Zealand man was left heartbroken when his partner of 27 years left only her ashes for him. Furious, that man ended up taking the matter to court where he was eventually paid NZ$300,000 (AU$275,343, US$211,080) from his former lover’s estate.

Read more: Man furious after partner of 27 years only leaves him ashes in will

As for Forysth, he died last year with his six children by his side. At 89, the host had been sick for quite some time and had been admitted to hospital earlier in the year with a severe chest infection.

Forsyth had a record-breaking 78-year career on British screens, having made his first TV appearance at the age of 11 after taken up tap dancing after being inspired by a Fred Astaire film.

The star received a knighthood in 2011 and his last appearance on TV was at Christmas 2015, when he sent a festive message to Strictly fans on the Christmas edition of the show. Tributes to Forsyth flooded social media as news of his death broke last year, with the London Palladium promising to dim its lights, stars sharing their memories of working with the entertainer and fans recalling experiences they had had with him.

Of course, Forsyth isn’t the only celebrity of person who decided not to leave money for their children. According to The Mirror, Gordon Ramsay, Elton John, Bill Gates and Simon Cowell are just some of the big names who won’t leave their millions to their kids.

What do you think? Are you surprised to see that Bruce Forsyth cut his kids out of his will? Have you discussed your wishes with your family before?