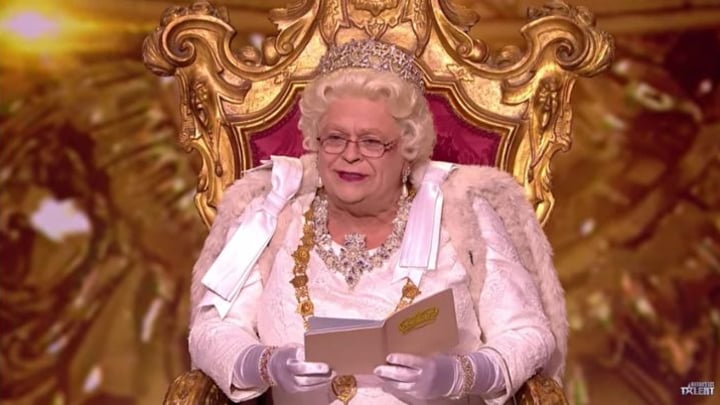 The rude “Queen” had judges fighting back tears of laughter this week in a hilarious performance on Britain’s Got Talent, as the comedian lashed out with an array of humorous insults.

Aussie comedian Gerry Connolly pulled out all the stops as he stepped onto the stage during the show’s semi-finals, donning his best royal attire to depict Her Majesty the Queen.

No one was safe from the firing line of comments, especially judge Simon Cowell who had a fair chunk of jokes thrown his way throughout the performance. However, Prince Philip was also targeted in the act, with the performer making some controversial comments about her ‘husband’ the Duke of Edinburgh.

Receiving the best royal welcome “Her Majesty” was elaborately guided to the stage, taking a seat on a gilded throne which sat waiting in prime position in front of the crowd.

“My lords, ladies and commoners,” Connolly began to a roaring laughter from the crowd. “I am most pleased to speak to all of you this evening and I look out to this theatre and see it is filled with national treasures. Simon, Alesha, David and of course me.” He then added, whilst looking at fourth judge Amanda Holden: “Sorry Camilla”.

The comedian continued by dishing out his first joke towards Cowell who sat with a huge smile on his face as he laughed along to the performance.

“It is important to remember that even if you have no talent, no charisma and no dress sense, you can still be on Britain’s Got Talent as a judge.”

Connolly went on to speak of “her many grandchildren”, explaining how difficult it is to remember all of their names, noting a recent conversation with the Duke of Sussex about one in particular.

“We have so many grandchildren and great grandchildren that Prince Philip and I struggle to remember their names,” the comedian told the crowd. “Only the other day I said to Harry, ‘what’s the name of the one that dribbles all the time and wets the bed’ and he said ‘grandad’.”

Throughout the hilarious performance Connolly made sure to add in some comments about the current financial state across Britain, noting that while times may be tough no one will be without a roof over their head.

“In these troubling times I think we should have confidence in this great nation,” the comedian explained. “House prices may fall but I can assure you that every single person in Britain will own a house… it’s the one I live.”

The crowd burst into laughter before the “Queen” added: “24 pounds per adult and £13.50 for children.”

Before finishing the performance Connolly made sure to take one final dig at Cowell and his role on the show.

“And if you’re becoming bored listening to a pensioner who dresses ridiculously and is paid millions for doing absolutely nothing, maybe you shouldn’t have Simon on the judging panel,” he boasted.

It was at this point that Cowell decided to press the buzzer in hopes it would boot the comedian out of the competition. However, this didn’t phase Connolly who ended the act by asking for three cheers for the Queen.

“And may god bless you all,” the comedian concluded.

Connolly is a well known comedian in Australia and has previously made guest appearances on Live and Sweaty, Tonight Live, Hey Hey Its Saturday, Fast Forward and Good News Week. He has also pulled off hilarious performances at the AFI Awards, TV Week Logie Awards and numerous comedy festivals.

What did you think of the performance? Did it make you laugh?