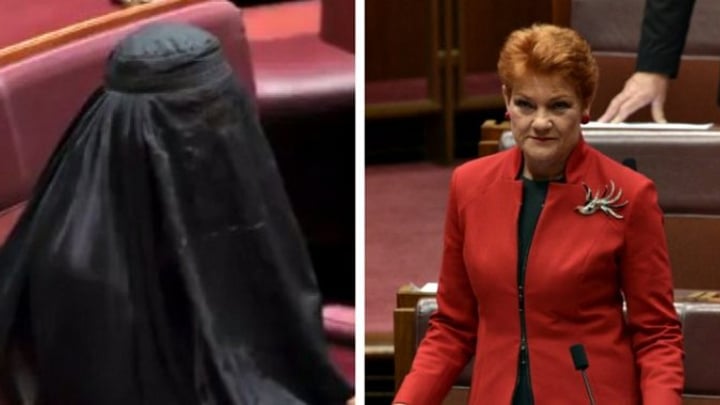 Pauline Hanson got a mixed reception as she visited “Australia’s most Muslim suburb” Lakemba, following her controversial ‘burka stunt’ – with some welcoming her, while someone else shouted at her to “go back to where she came from”.

The One Nation leader sparked outrage in August last year when she arrived for the Senate’s Question Time wearing a full burka, with her face completely covered. She was campaigning against the Islamic dress at the time, claiming it’s a security risk.

Despite protests, she insisted it was her extreme way of getting her message across.

Now, she has defiantly stood by her decision as she appeared on Channel 9’s A Current Affair, and opened up on what pushed her to made such a dramatic move.

“They are being forced to wear it, and that’s why women are protesting,” she claimed. “They don’t want to wear it. Find another country that suits you then, go and wear it in another country.”

Revealing how it felt to wear it, she said: “It’s a horrible thing, you feel so claustrophobic, it feels so unnatural to me.”

TONIGHT on #9ACA, we take you behind the scenes of Pauline Hanson's Burqa stunt with #EXCLUSIVE footage. pic.twitter.com/AbJS3vQl1k

She visited Lakemba with the show to meet local residents and workers on the high street – but it didn’t get off to a positive start.

Asked if she’s ever been there before, Hanson admitted: “I haven’t I’ve had no wish to come to Lakemba I can tell you that.”

Speaking to the show’s presenter, she said: “There are communities who have no intention of assimilating into our lives,” before adding: “A lot of people don’t wish to assimilate into Australia’s way of society, they don’t speak the language.”

While the presenter said she felt safe walking down the high street, Hanson insisted it was because they were surrounded by police, before adding: “A lot of the police wont come to area because they’re in fear.”

Their conversation was briefly interrupted when a passer by heckled Hanson, shouting: “Go back to where you came from”, which angered her hugely. She hit back saying: “Hang on a minute, this is Australia, I was born here, I should be able to go anywhere I want to.”

But while she got a tough response that time, plenty more passers by and shopkeepers greeted her with open arms.

She’s now preparing to release her new book, and in a message to her critics, she concluded by saying: “Read my speeches in full, understand me, don’t be an armchair critic.

“There’s too many gutless bastards in this place who think like I think but don’t have the bloody guts to stand up and do something about it.”

Pauline Hanson’s dislike of all things Muslim, including the burqa, is no secret. The Senator visited “Australia’s most Muslim suburb” with A Current Affair, and opened up about her infamous burqa stunt. #9ACAhttps://t.co/wjxH5ploch pic.twitter.com/8oZDuP2lOJ

It comes after an emotional Attorney-General George Brandis was later given a standing ovation following Hanson’s choice to dress in the burka, when he accused her of attacking the Islamic faith and undermining Australia’s relationship with the Islamic community as a whole.

“To ridicule that community, to drive it into a corner, to mock its religious garments is an appalling thing to do. I would ask you to reflect on that,” he said at the time.

Senator Penny Wong applauded his words, and added: “It is one thing to wear religious dress as a sincere act of faith, there is another to wear it as a stunt here in the chamber.”

But Hanson stood by her decision, and later told 2GB Radio she had done it to get her message across over her security concerns.

“I am very much against the burka,” she told the radio show. “It is not a religious requirement. This is brought in by men who want to cover up their women. It is oppressing women.”

While she was identified before entering the room at the time, she insisted no-one had asked to see her face.

Do you think Pauline Hanson went too far by wearing the burka?