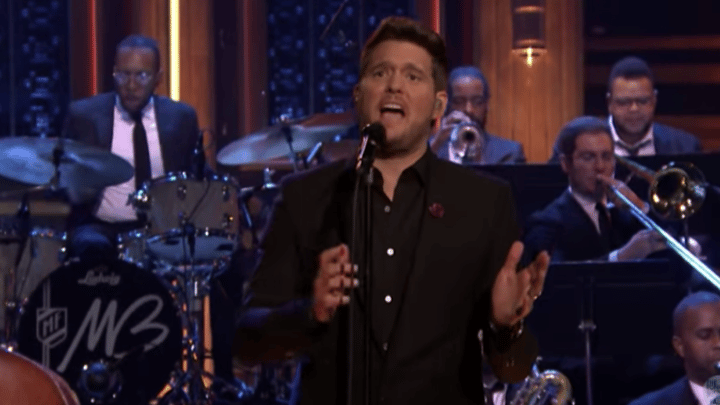 Michael Buble well and truly brought the house down when he performed a Louis Armstrong classic during an appearance on The Tonight Show Starring Jimmy Fallon on Tuesday.

The much-loved Canadian singer received a rousing round of applause as he stepped out and performed the hit song ‘When You’re Smiling’ for the audience with fans around the world tuning in to watch him croon his way through the classic number.

Although he hasn’t showed off his beautiful singing in a while due to his son’s cancer battle, the 43-year-old certainly delivered as he smiled his way through the catchy tune.

Singing and dancing alongside his band of talented musicians, Michael pulled off the song with ease, leaving fans in absolute awe of his talent.

The mesmerising performance, which was shared on YouTube, garnered plenty of comments from fans, who were quick to compliment the singer on his beautiful voice and welcome the father-of-three back to the spotlight after dedicating much of his time over the past two years to his family.

“Michael, welcome back. So happy your son is doing well and that now you’re back. We’ve missed your incredible talent; you sound better than ever,” one person wrote.

While a second added: “I’m smiling while watching you Michael”. And a third said: “His voice is so smooth and perfect”.

This is one of Michael’s first performances since he received his very own star on the Hollywood Walk of Fame. The ‘Haven’t Met You Yet’ star was joined by his wife Luisana Lopilato and the famous Priscilla Presley for the exciting occasion last week.

The talented singer delivered an emotional speech during the festivities, which happened to fall on the same day his new album was released.

He joked the likes of Presley and record producer David Foster showing up made him feel important.

“That was no small feat today. My record being out today and having a star here on the Walk of Fame, I have personally never felt so self-important before,” he told the crowd.

He said he struggled writing his speech and said that although he was receiving the star, it wasn’t about him. Instead, he said it was about the fans who have supported him through his career.

Are you a fan of Michael Buble? What do you think of his performance?