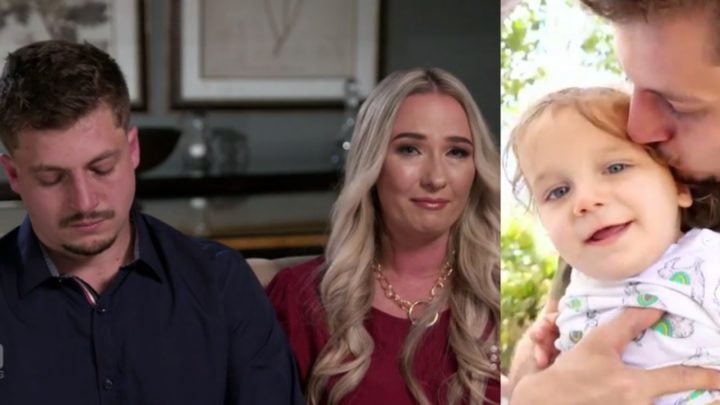 The parents of a baby boy who was dragged out of a camper van and mauled by a dingo on Fraser Island earlier this year have relived the horrifying moment they realised their young son was missing in a harrowing television interview.

Parents Luke and Sarah Allister appeared on Channel Nine’s 60 Minutes on Sunday night, breaking their anonymity for the first time since the incident, and opened up about the horrific ordeal they endured in April when a wild dingo entered their camper while they slept, snatching their 14-month-old son Hunter.

The baby boy was taken in the early hours of April 19 as he camped with his parents, four-year-old sister Harper and gran Shaurne Keas, on popular tourist destination Fraser Island, 300 kms north of Brisbane, with his mum waking to hear his cries shortly after midnight.

“I don’t know exactly how long, but seconds, his cry went from being inside the camper to outside,” Sarah said. “I don’t know what went through my head, I just sat up and said ‘Luke he’s outside’.

“Luke got up, unzipped and ran out the door of the camper and he saw that a dingo had him by the back of the neck and was dragging him off into the bush.”

Luke added: “I just ran, I didn’t think. When I got there the dingo has got him by the back of the head and pulling him into the bush.

“He sees me, he’s looked back down, done a quick more of a dash back. I swore and I yelled very loudly. He did [drop him] I picked him up but realised there was a lot of blood.”

Shaurne, Hunter’s grandmother, was desperately trying to call for help after the attack. #60Mins hears the harrowing phone call she made to emergency services, telling the operator “the baby is dying.” pic.twitter.com/abwOOEcAL9

Luke said that while his son was screaming in pain, he was “happy” that Hunter was crying as it meant he was still alive. The shaken father then returned to the campsite, while Sarah woke her mother Shaurne up to call the emergency services.

Sarah’s mum then dialled 000 to call for help, with her harrowing emergency call played out on the show as the grandmother told the operator “the baby’s dying”.

She told 60 Minutes: “Absolutely I thought he was [dying]. As soon as I saw there was blood dripping off my hand, it was just pouring everything. I honestly thought, by the state of the child, that, yeah.”

“We’ll need an ambulance, a helicopter, the baby’s dying,” she can be heard telling the operator. “It’s all really wet through with blood.”

Read more: Horror as baby is dragged from campervan by a dingo on Fraser Island

Despite Luke saving Hunter from the ordeal, the father-of-two then found himself surrounded by a pack of dingoes as they waited for emergency services to arrive, with Luke believing they had returned to reclaim his badly injured son.

Hunter has thankfully recovered from his injuries, with the baby boy left with just several small scars beneath his hair on the back of his head.

The brutal attack was the third so far this year at Fraser Island.

What are your thoughts on this story? Have you ever visited Fraser Island?