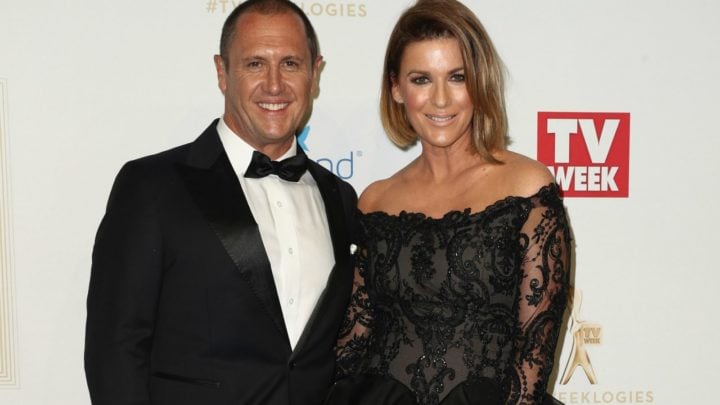 After working on Australian television for years, Larry Emdur has interviewed plenty of celebrities — and has come across his fair share of unpleasant interviews.

The Morning Show host told The Kyle and Jackie O Show on Thursday that late comedian Joan Rivers was his and Kylie Gillies worst guest ever.

Kylie then added that Larry found Joan’s interview particularly uncomfortable because she used the word “vagina” on morning television.

“She just used the word vagina on our program which is why Larry has never forgotten it,” she told the Sydney radio hosts.

Meanwhile, host Kyle Sandilands then shared his own experience with the American comedian, who died in September 2014.

“When we had Joan Rivers on [the show] it was really weird, but bless her, I loved her,” he said. “When she came on, myself or Jackie would ask her a question and she’d say, ‘Well, oh…funny thing,’ and she would talk about nothing while some other fat comedian would scribble out an answer on a piece of paper.

“And then he would show it to her and then she would look at the paper and execute it as her own work. Really weird.”

It comes after American singer-songwriter Michael Bolton appeared to doze off after Larry and Kylie cued him in for a live chat on the popular Channel Seven show last month. However, Michael later clarified that he wasn’t sleeping and was actually on his phone while his producers were experiencing technical issues.

“Michael Bolton was fantastic,” Larry said of the on-air blunder.

Larry and Kylie aren’t the first presenters to have a bad experience with a celebrity. In 2018, TV star Andrew Denton told 97.3 FM’s Bianca, Terry and Bob that Hollywood star Goldie Hawn was his worst guest ever and described her as both “bad” and “unpleasant” to interview. In fact, the interview was such a disaster, he decided against airing their awkward chat, and to this day it’s never been televised.

“Maybe she was having a really bad day and it was via satellite, but she was so bad and so unpleasant,” he said.

He added that Hawn’s management team was also awful, saying, “[they] called our producer the ‘c’ word. It was just an awful experience”.

“We just thought, ‘we’re not putting you onto air and goodbye’.”

Do you think Joan Rivers would be nice? What are your thoughts on Larry Emdur’s confession?