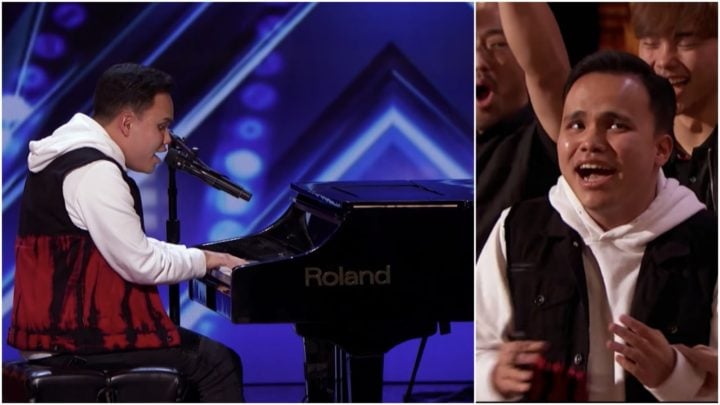 Kodi Lee's performance earned him a standing ovation and the golden buzzer. Source: YouTube/America's Got Talent.

There wasn’t a dry eye in the house as blind singer Kodi Lee, who also has autism, took to the America’s Got Talent stage to show off his incredible musical talents.

The 22-year-old moved the judges and audience to tears as he performed an incredible rendition of ‘A Song For You’ by Leon Russell on Tuesday night’s episode of the US talent show.

Kodi, who was joined on stage by his mum Tina, impressed the likes of Simon Cowell with his incredibly emotional performance, which earned him a standing ovation as well as the gold buzzer from judge Gabrielle Union.

As the young singer began his pitch perfect performance, the judges looked visibly shocked as they heard him belt out the first notes of the song.

Before he took to the piano, Kodi’s mum walked her son out onto the stage and told the judges about her son’s love of music, crediting it with “saving his life”.

“We found out that he loved music really early on,” she said. “He listened and his eyes just went huge and he started singing and thats when I was in tears, because I realised ‘Oh my gosh, he’s an entertainer’.

“Through music and performing he was able to withstand living in this world. Because when you’re autistic it’s really hard to do what everyone else does.

“It actually has saved his life playing music.”

Just before Kodi started playing the piano, Tina could be heard telling him: “It’s your time, okay.”

I gave #KodiLee my Golden Buzzer but his family fought for the information, resources & opportunities to make his dreams come true. Everyone deserves the chance to shine, let's work to make that a reality. https://t.co/nG7HO0jv1m

Notorious tough judge Simon Cowell said: “What just happened there was extraordinary. I don’t know what it’s like to live in Kodi’s world. All I can tell is you is you obviously have an amazing relationship, the two of you.

“Your voice is absolutely fantastic, you have a really beautiful tone. Thank you so much for trusting us on this show. I am going to remember this moment for the rest of my life.”

While fellow judge, professional dancer Julianne Hough said: “Everybody needs a voice and an expression and I really feel your heart, your passion. Your voice blew all of us away. I just want to say that I heard you and I felt you and that was beautiful.”

Pressing the golden buzzer, actress Union said: “I’m a new judge this season and I am also a new mum this year. It’s the toughest job and the most rewarding job i’ve ever had, you just want to give your kid the moon and stars and the rainbows, and tonight I am going to give you something special.”

Kodi was visibly moved and began jumping up and down in excitement after hearing the news that he would be progressing to the live shows in Hollywood as his family rushed out onto the stage to hug him in an emotional moment.

Cowell then joined the family on stage, telling the performer: “I’m so proud of you.”

What do you think of Kodi Lee’s performance? Were you moved by it?