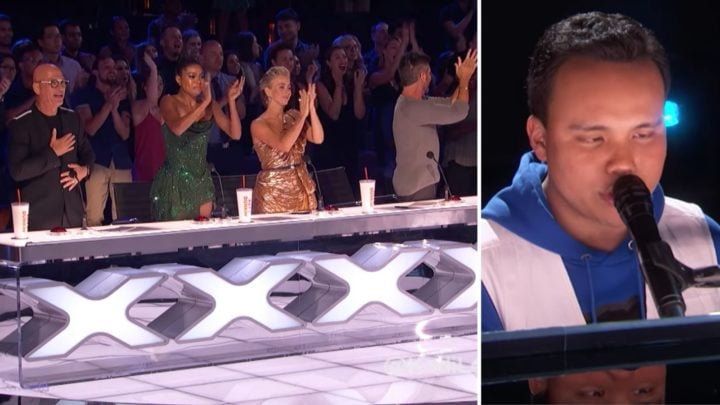 Kodi Lee impressed the America's Got Talent judges with a Simon and Garfunkel classic.

His original audition for America’s Got Talent left star judges Simon Cowell, Howie Mandel, Gabrielle Union and Julianne Hough in tears and made him a household name across the world. Now, blind singer Kodi Lee has returned to the AGT stage once again with a performance that is even more powerful than the first.

The 22-year-old, who also has autism, returned to the stage as a contestant in the show’s quarter finals earlier this week with a haunting rendition of Simon and Garfunkel’s ‘Bridge Over Troubled Water’. The singer sat behind his piano and it wasn’t long before the entire audience was captivated once again.

Kodi really got the audience going when he hit the chorus of the iconic track, earning cheers from the crowd, and finished the song off by hitting all the right notes. All four of the star judges gave the young musician a standing ovation, while some audience members could be heard chanting the contestant’s name.

Gabrielle was even spotted wiping tears away from her eyes following the moving performance. She told the singer: “Kodi, you’ve changed the world and you keep changing the world.

“Who you are and what you stand for and what you continue to do makes the world so much more of a better, beautiful place and we have to stop putting limits on our children. We have to keep believing in each other.”

Simon said: “You continually amaze me and it made me realise when I watched that clip [original audition] we are nothing without people like you.”

He added: “Furthermore, we are nothing without our audience who so generously share your clips so other people around the world can share your talent. You are genuinely one of the most extraordinary people and talents we’ve had the great fortune to have on any show we’ve ever made.”

Kodi thanked his fans for all their support and said that he loved them all, while fans flooded social media with further admiration for the singer. One person on YouTube wrote: “He is so special a true angel. I could listen to him sing all day. Such a gift he is to this world.”

Another comment read: “Pure and sincere emotion, he is showing us what makes him happy and what he loves, and his motive is simply a true love of music,” while a third added: “Kodi is the definition of pure heart and talent, when the world has long become such a selfish and cruel place, Kodi brings hope that there’s still genuine love out there, and I bet he’ll win the show and that’s the definition of love eventually.”

Kodi first appeared on America’s Got Talent in May and moved the judges and audience to tears as he performed an incredible rendition of ‘A Song For You’ by Leon Russell. Just like his most recent performance, Kodi was joined on stage by his mum – who explained to the audience that her son loved music and that it even saved his life.

“We found out that he loved music really early on,” she said. “He listened and his eyes just went huge and he started singing and that’s when I was in tears, because I realised ‘Oh my gosh, he’s an entertainer’.”

She added: “Through music and performing he was able to withstand living in this world. Because when you’re autistic it’s really hard to do what everyone else does.”

That performance earned him the golden buzzer, causing Kodi to jump up and down with excitement.

Are you a fan of Kodi Lee? What would you like to see him sing next?