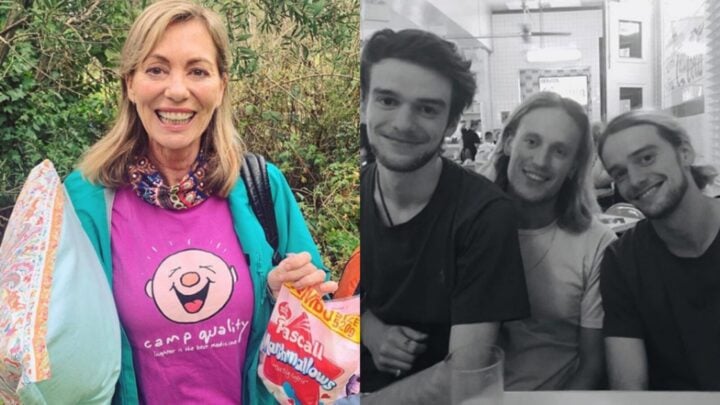 Kerry Armstrong is best known for her acting abilities, having appeared in a string of popular shows and movies over the years including Prisoners, SeaChange and Lantana, but for the past two years, the Australian actress has been busy working as an advocate for a charity close to her heart, Camp Quality.

The national children’s cancer charity, which has been operating for almost four decades, runs services and programs, such as camps and fun days, for kids aged 0 to 13 who have been diagnosed with cancer or are dealing with the diagnosis of someone close to them.

Kerry, 62, got involved with the charity after her short stint on I’m A Celebrity… Get Me Out Of Here! in 2018. As part of the show, celebrities take on the South African jungle to raise money for a charity. Since then the actress has been a keen advocate for Camp Quality and has worked to raise awareness of the charity by getting involved in multiple fundraising events and even making special guest appearances on camp.

But her choice of charity runs deeper than that. One of Kerry’s sons was diagnosed with a brain tumour when he was just 11 years old, which she says is a big part of the reason why she chose Camp Quality on the popular reality show. The actress has twin boys Jai and Callum and has an older son Sam.

Now, speaking in an exclusive chat with Starts at 60, Kerry has opened up about Camp Quality’s latest initiative. She says the charity has launched Big Walk For Little Kids, a brand-new, Covid-safe walking challenge to raise much-need funds to support children — and their families — affected by cancer.

“What I most respect and love about Camp Quality, and why I’m honoured to be one of their ambassadors, is because the whole focus is about dedicating and providing really hands-on, compassionate and practical ways of looking after children and their families affected by cancer,” she says.

The event is open to all fitness levels and asks everyday Aussies to challenge themselves to walk 25 kilometres, 50 kms or 100 kms during the month of October while raising money.

“By donating or supporting Camp Quality’s Big Walk for Little Kids means that you would be able to raise enough money to send some of these children and their families on one of our camps,” Kerry says.

And the benefits don’t stop there, she also reckons it’s a great way to get active, saying: “Part of the reason I love this challenge is [that] it’s also a great motivator to get active and feel great while you’re supporting our children and their families. And walking is so good for your heart, your body, and so good for your soul!”

Meanwhile, speaking about her time on I’m A Celebrity… Get Me Out Of Here!, Kerry said it forced her to count her blessings and inspired her to do more.

“[It] made me realise I don’t have one second of being able to feel sorry for myself,” she says recalling the experience. “I began to want to – when I got out of there – do more, [do] more work towards how to make the world a fairer place.”

And Kerry has stuck to her word, telling Starts at 60 that she’s been busy putting together a website to help young women from the ages of 13 to 30, with difficult issues such as “bulimia, rape, bullying or fears, and anxiety of any kind”.

Are you a fan of Kerry Armstrong? Do you think this is a great initiative?