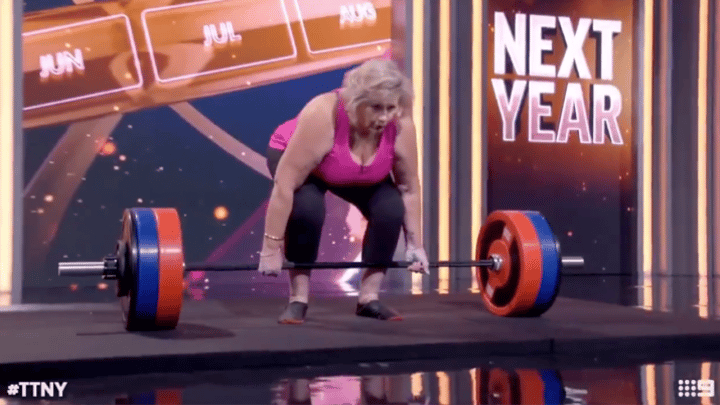 Marion Baird proved she's certainly not weak as she lifted 125kg while on stage. Meanwhile the gran also gave host Karl Stefanovic a shock as she lifted him over her back. Source: Twitter/ This Time Next Year

Karl Stefanovic was put in his place and called a “weak sook” by a weight-lifting gran on Monday’s episode of the inspirational show This Time Next Year after she impressively picked him off the ground to show off her strength.

Marion Baird proved that no matter your age, you can still smash your goals as she appeared on the program with a plan to break a 115kg power lifting record. Speaking about her achievements to date the Sydney resident claimed she could probably lift Karl off the ground.

Without a moment’s hesitation the two got to their feet with Marion grabbing Karl by the legs and hurling him over her back with much ease. The host’s hilarious facial expressions were enough to make anyone laugh, however, it was the gran’s quick wit that really gave everyone in the audience a bit chuckle.

“I never being lifted I could hurt so much!” Karl exclaimed after being set back down on the ground. To which Marion bluntly replied: “Oh, you weak sook!”

After a year of hard work and dedicated training Marion returned to the show to reveal she had smashed her goal of becoming champion, not once, but twice. Sitting down on the couch beside Karl once again Marion explained: “I certainly did [break the record]. And then I did more. [I lifted] 120kg. It makes Karl a lightweight!”

But it didn’t stop there with Karl urging Marion to tackle 125kg right there on stage for everyone to see. And the gran didn’t disappoint. Stepping up to the stage with much confidence and lifting the weights as if it was a feather.

Full of joy the excited Baby Boomer ran back to Karl with a big smile spread across her face as the two embraced in a big congratulatory hug. Then it was Karl’s turn. Spurred on by calls from the audience to have a go the TV host approached the weights and bent down to grab hold of the bar.

“Karl, Karl, Karl,” the crowd yelled out in support. But sadly, Karl could not beat Marion. Joking he had ripped his suit pants the 45-year-old quickly bolted off the stage backwards with a hand to his bum to hide the apparent split.

Marion isn’t the only Boomer to show off her impressive fitness and step into the spotlight with a 76-year-old former psychologist revealing to Starts at 60 what drove her to beef up her body and appear on this year’s Australia’s Got Talent in an outfit most grandmothers would never dream of wearing in public.

From seeing overweight people with “flesh hanging off their arms”, to struggling with cruel stereotypes and finally finding love with a man 23 and half years her junior, Janice Lorraine said she has faced a tough road to achieve her amazing transformation – but has never been happier.

Janice Lorraine appeared on Australia’s Got Talent earlier this month in a daring purple sparkly bikini, shocking the judges as she performed to ‘Hot Stuff’ while flashing her jaw-dropping muscled body. The grandmother certainly won the judges over with her posing to the tune.

With her abs on full display Janice shocked the crowd in the best of ways as she proved bodybuilding is not just for the young-uns. “The crowd were wonderful,” she admitted. “Every time I did a pose they cheered, it was really nice. Very nerve-wracking, but the people were lovely.”

Have you been watching This Time Next Year? What type of exercise do you do to stay fit and healthy?