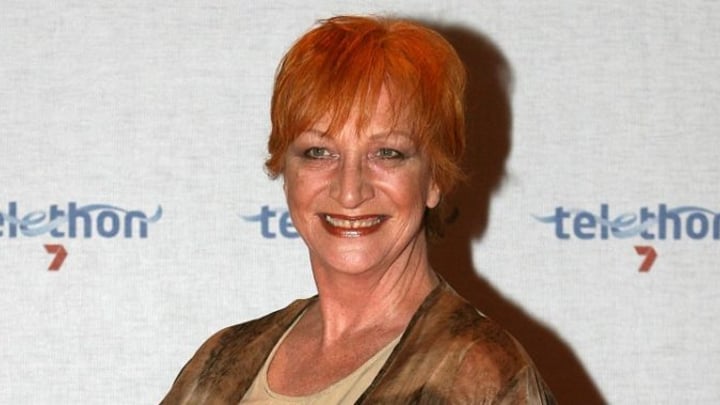 Home and Away star Cornelia Frances passed away this week. Source: Getty.

Home and Away and Weakest Link legend Cornelia Frances has died at the age of 77 following a battle with cancer.

The actress, who played Morag Bellingham on the hit Aussie soap, passed away just weeks after celebrating her 77th birthday with loved ones in hospital. According to multiple news outlets, she is thought to have died surrounded by her friends and family overnight.

He wrote in the emotional caption: “A very personal photo of my mum during one of her resting moments, she is so peaceful, soft and serene. I truly love this woman. #f***cancer #beautiful #cornelia #mum #iloveyou #whatawoman #peace #sleeytime #sleep #rest #divinefeminine #strong #inspiring #iloveyoumum.”

Her former co-star Ray Meagher, who plays Alf on the soap, told the Daily Telegraph: “Cornie was an incredibly loved and valued member of our cast over many, many years… We had a moment of silence for her on set this morning and she’ll be sadly missed by both cast and crew.”

Tributes have already begun pouring in from fans and fellow actors. One wrote on Twitter: “RIP Cornelia Frances. A stalwart of the Oz entertainment industry. We worked together on Sons and Daughters and toured England together once in a play. A great character who will be greatly missed.”

Another added: “I loved this woman, she played the bitch magnificently. I was a kid when I watched her in “The Young Doctors”, then Morag in “Home & Away”… Bless you Cornelia & Thank You. Rest in Peace.”

One more shared a throwback photo of her on the Young Doctors as Matron Scott, and wrote: “Farewell Matron Scott; and vale, #CorneliaFrances..”

The soap star first revealed she was fighting bladder cancer in January, and said she got the diagnosis in 2017 following a series of health scares. Despite chemotherapy and radiation, the cancer spread to her hip and has since spread to her spine.

Speaking on A Current Affair, earlier this year, Frances revealed her dramatic transformation as she continued to bravely fight the disease.

Speaking about her glittering career on TV, she added: “That’s 60 years of being in the industry which has thrilled me, it’s been a wonderful road and I’ve loved every minute.”

Frances rose to fame on Aussie soap Young Doctors in which she played the acid-tongued Sister Scott. She also appeared on Sons and Daughters before taking on the role of Alf’s evil sister Morag on Home and Away.

Were you a fan of Cornelia Frances? What’s your favourite memory of her?