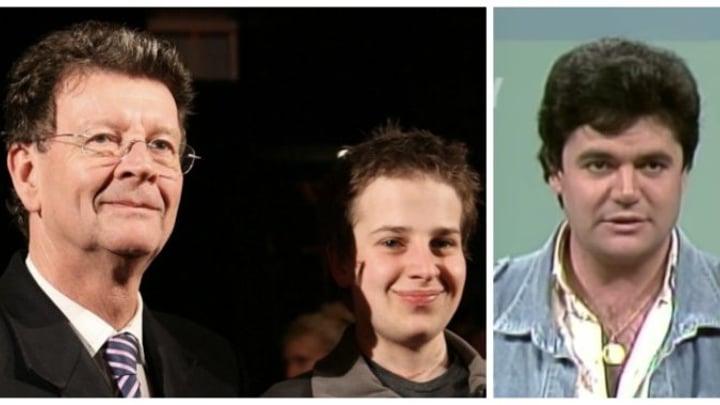 Daryl remembers learning of Samuel's diagnosis in the mid-1990s. Source: Getty and YouTube/Hey Hey It's Saturday.

On Wednesday the tragic news broke that Samuel Symons, the son of TV and radio legend Red Symons, had passed away at the age of 27 following a lifelong battle with cancer.

Symons was just four years old when he was diagnosed with a brain tumour, and now Red’s Hey Hey Its Saturday colleague Daryl Somers has reminisced about learning of the child’s diagnosis for the first time during the show’s heyday.

Read more: Heartbreak for Red Symons as his son dies from cancer at age 27.

Sharing a sweet photo of Red alongside his two of his sons, Daryl paid tribute to “brave” Samuel on Facebook on Wednesday evening, saying his thoughts were with his former co-star, along with his wife Elly and Samuel’s brothers Raphael and Joel.

“You may be aware of the passing of Samuel Symons, son of Red,” Somers, 67, wrote. “Sam passed away early this morning surrounded by family after battling cancer that first appeared when he was just four years of age.

“I remember it well as it was during the heyday of Hey Hey and we were all shocked at the sudden diagnosis of a brain tumour. He fought bravely and we can only be thankful that he was able to enjoy another 22 productive and fulfilling years before succumbing to this awful disease.”

Samuel’s family confirmed the news on Wednesday morning as they released a heartbreaking statement on 3AW, remembering him as a “beautiful son”.

“It is with the deepest sadness Red announces the passing of his beautiful son Samuel Symons. Samuel passed peacefully overnight surrounded by his family,” they said.

“We ask that you please respect the privacy of Red and his family at this very sad and difficult time.”

Reading out the statement to listeners on 3AW, host Neil Mitchell expressed his sympathy and added: “In his short time on this program, Red has become very much loved, and he has been very much loved in this town for a long time.

“He is a delightful, friendly, engaging man, and I feel for his family going through this.”

Tributes also poured in on social media, as one fan wrote: “So sad to hear that Red Symons’ son Samuel has just passed away, after many years of cancer battles. Jon Faine teary and distressed announcing it on air.”

Meanwhile, another Twitter user praised ABC radio star Jon Faine – who is a close friend of Symons – after he broke down in tears on air while relaying the devastating news to his readers.

“#ThisIsAustralia A beautiful tribute to Samuel, from Jon #Faine on @abcmelbourne, on the news his close friend Red Symons son has died overnight,” he wrote.

Were you saddened to hear this news yesterday? Do you have a message for Red and his family at this difficult time?