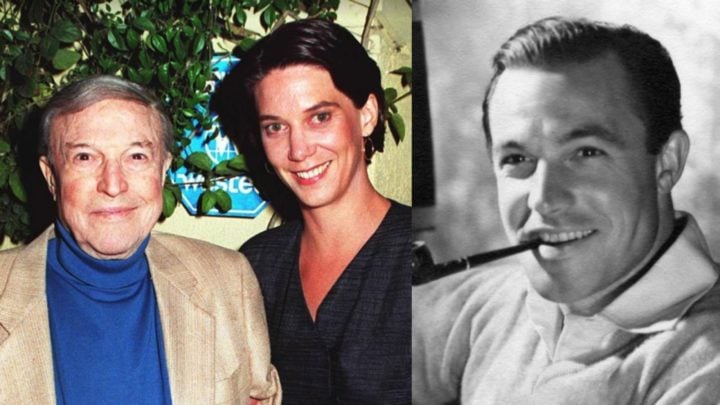 Gene Kelly died in 1996 after a battle with illness and a stroke. Source: Getty.

The decision by Gene Kelly’s widow not to organise a funeral for her late husband when he died in 1996 no doubt surprised many, but she has now revealed the wish came from the Singin’ In The Rain star himself before he passed away.

The legendary actor and dancing star died at the age of 83 following a series of strokes, shortly after he married his third wife Patricia Ward Kelly. And she has now opened up in an exclusive chat with Starts at 60 on what his final days were really like behind closed doors – and just why he chose not to follow tradition in the weeks that followed his death.

Patricia is set to tour Australia with her show Gene Kelly The Legacy next year, in which she stands in front of a crowd and reads back, plays and recites some of their memories together – portraying a more personal side to the legendary star. And one subject she touches on is his declining health in his final years.

“I talk about this in the show because a lot of people don’t talk about the end of life and I think it’s really integral. It’s part of it, talking about grief and loss,” she said. “He was in and out ill for much of the time we were together. A lot of it was kept out of the press, we would sneak into hospitals as best we could. He really did face the end of his life with such grace and such dignity. It was really a lesson in how to deal with difficulty, and it was really a bonding time for the two of us.”

The pair first met at the Smithsonian in Washington DC, US, in 1985, when he was the host for a television special about the museum and she was a writer on the project. Despite their 47-year age gap, they enjoyed more than a decade of blissful happiness together, with Patricia helping to care for him before his death.

At the time, she was helping to write down his memories for a book about his life, so has records of almost all of their conversations and movements. She claimed patient confidentiality wasn’t so much of a thing in the ’90s and they’d have nurses selling stories to the press about Gene as he battled illness in his final years. In fact, she claimed some journalists even dressed up as priests to sneak in themselves.

“It was awful. People assume that a celebrity will have the best, but in fact I think it’s very, very hard for a celebrity, very difficult. But in a way it brought us closer, we were fighting the same fight. Of course I was writing down everything, which was a way for me to cope,” she explained.

“As long as I was writing, he was still alive. But then the problem is you realise when you stop writing, what happens then?”

While Patricia said she had grown up herself in a household that spoke openly about death, it wasn’t something she’d touched on initially with Gene. However as he grew older that changed and she expressed pride in how open he became with her.

“I think it was really good for him because, here was a guy from a different generation talking about things that you just generally didn’t talk about. I have to give him a lot of credit, for a man of that age and that stature to really assess and reassess his life and also to consider the end of life as frankly as he did, and lay it out.

“I was very proud of him. And it helped me a lot because I knew, people have such interesting feelings and thoughts about death and the final days, so I just needed to know what he wanted. I stuck to that and I knew, if I took any flack in the public, the press or anything, I would know that I did what he asked me to do. You have to do that for somebody, you have to make that promise.”

In the end, it was Gene’s wish not to have a memorial service or funeral, instead keeping the mourning private for his family. While many will no doubt have been surprised by the decision, Patricia explained it followed a life lived in the limelight – with his final wish for it to happen behind closed doors.

“He was very specific, he wrote that out – I had him write it out and notarise that!” she admitted. “He didn’t want to be buried anywhere, he said, ‘I’m tired of being on a tour bus route. Every time we would leave our house the tour bus would be going by and would follow us. He said, ‘For me it’s dust to dust’, he didn’t need to have a big memorial some place. I really understand that.

“I think some people think they have to go someplace, but for me he’s just always here so I don’t need to go to a particular spot to mourn him. He was very thoughtful.

“I think what helped him was experiencing the death of so many of his friends. He saw what happened to them, so it also helped to guide his choices. We’d sat through a lot of memorial services and visited a lot of gravesites, so he decided what he wanted.”

Before meeting Patricia and settling down, Gene had always insisted he would never marry again following the death of his second wife Jeanne Coyne. The couple had two children together, while Gene already had a daughter with his first wife Betsy Blair, who he divorced in 1957.

However, Patricia admitted it crept up on him and after five years, he eventually popped the question. She recalled: “I think by falling into this relationship through work… we set out to work together and then the other just came upon us both, it wasn’t until five years into being together when I’d lived with him the whole time that he finally got around to it.”

Were you a fan of Gene Kelly? Would you choose to shun a traditional funeral service?