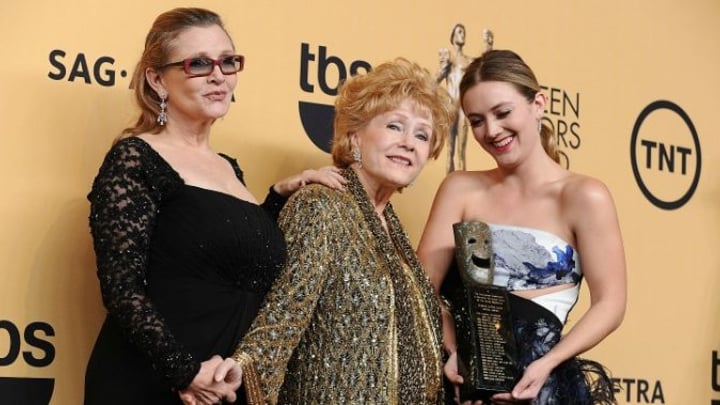 Billie Lourd, the daughter of Carrie Fisher and granddaughter of Debbie Reynolds, has revealed her family's holiday tradition. Source: Getty

Debbie Reynolds’ granddaughter Billie Lourd has revealed a cheeky family tradition she has continued to follow over Thanksgiving since her grandmother’s death.

The 26-year-old actress and daughter of Star Wars star Carrie Fisher appeared on The Late Late Show with James Corden earlier this week ahead of the holiday celebrated in America. The Scream Queens star where let lose on the family tradition she has apparently perfected and originally learned from her famous grandmother. .

Speaking on the American talk show on Tuesday, Billie proved that she hasn’t just followed in the footsteps of her grandma with her career choice, but with her cooking abilities as well.

While most are busy in the kitchen whipping up the roast turkey and cranberry sauce for Thanksgiving, the American Horror Story star admitted she instead buys a tasty dish and pretends it’s her own — exactly as her grandmother Debbie used to do.

“What I do is lie, I bring something from a great restaurant and I put it in a sad little box and pretend like I did it,” she explained when host James Corden asked if she had any traditions.

Billie went on to explain that she isn’t the best of cooks but she is great at following the tradition that her beloved grandma taught her.

“It’s kind of become a family tradition vibe, my grandmother used to do it. She used to do it very poorly. I do it better.”

Sadly the 26-year-old no longer has her mother or grandmother to spend the special holiday with. Star Wars icon Carrie, who is best remembered as Princess Leia Organa from the movie franchise, died on December 27 2016, four days after suffering a heart attack on board a flight to Los Angeles.

Read more: Debbie Reynolds ‘willed herself’ to die to be with daughter Carrie Fisher

Singin’ in the Rain star Debbie died one day later, on December 28, after suffering a stroke. According to Debbie’s surviving son Todd, his mum actually willed herself to die so that Carrie wouldn’t have to be alone, the Daily Mail reported earlier this year.

“The common theory about mum’s passing was that, after losing Carrie, Debbie Reynolds died of a broken heart. Take it from the son who was there, who knew her better than anyone else on earth – that’s simply not true,” Todd reportedly wrote in his book titled My Girls: A Lifetime with Carrie and Debbie.

“Debbie Reynolds willed herself right off this planet to personally see to it that Carrie would never be alone.

Have you ever celebrated Thanksgiving? Do you have any special family traditions you follow over the festive season?