Look at them now! The Brady Bunch cast reunite 50 years on from show’s debut 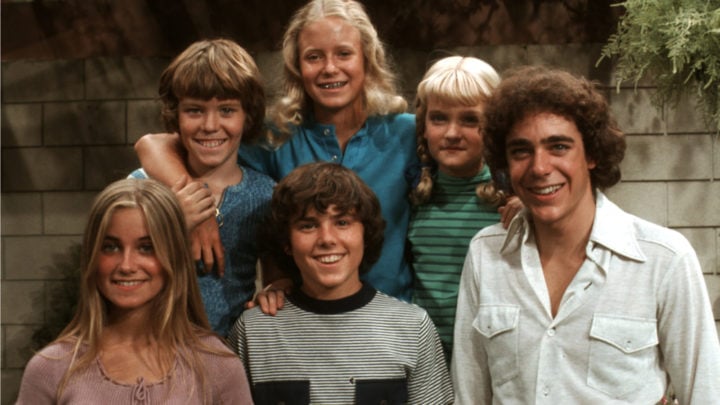 Jan, Marcia, Cindy, Greg, Peter and Bobby all got together on Thursday to mark the premiere of their new show A Very Brady Renovation. Source: Getty.

It has been almost 50 years since The Brady Bunch debuted on television in September 1969, delighting viewers for almost five years, but the cast of the hugely popular TV show reunited this week for the launch of a brand new program.

Jan, Marcia, Cindy, Greg, Peter and Bobby all got together on Thursday to mark the premiere of their new show A Very Brady Renovation, which sees the on-screen siblings return to their fictional former home to complete a complete DIY overhaul of the property so that it mirrors the house viewers will remember.

The six stars – Eve Plumb, 61, Maureen McCormick, 63, Susan Olsen, 58, Barry Williams, 64, Christopher Knight, 61, and Mike Lookinland, 58 – reunited on the red carpet at The Garland Hotel in Los Angeles, USA. And the actors looked a world away from the roles that made them famous as they posed on the red carpet at the glitzy event.

Eve, 61, who played middle sister Jan, looked sensational in a retro ’70s shift dress which featured psychedelic patterns in a series of bold colours. While Maureen, who played the iconic role of Marcia, looked stunning in a silk navy two-piece, made up of a structured short-sleeved top and a matching pair of wide-leg trousers.

Susan, best remembered as curly-haired youngster Cindy, opted for a simple pair of black jeans for the occasion, dressed up with a glittering top with fluted sleeves. While the male Bradys donned shirts and smart pants for the occasion, as all six screen siblings beamed for the cameras, looking delighted at the prospect of being back together again.

The TV show was hugely popular with audiences across the world, as the show aired for five seasons before it was cancelled in 1974. The cast went on to star in a number of sequels though, the most recent of which being The Brady Bunch in The White House which hit US TV screens in 2002.

Now the siblings have reunited for the brand new HGTV renovation show which sees the actors return to their fictional home in LA, which fans of the show will recognise instantly, to remodel the property to mirror the house at the centre of the famed sitcom. While the exterior of the beloved home was used for filming, the internal scenes were actually shot in a Hollywood film studio, so the inside didn’t look anything like the home the Brady’s lived in.

To preserve the memories of children across the world, the stars teamed up in November last year to transform the house, which is reportedly worth $3.5 million. Speaking about the experience this week on morning show Today earlier this year, the cast explained it was the first time they had all been together in 15 years.

“It’s been [15 years] since all of us have been back together,” 63-year-old McCormick said at the time. “Everyone looks at the projects as they come and this one I think just got us all [excited]. It was HGTV who, you know, their programming is amazing. This whole show is filled with so much love. The crew, everybody behind it – it’s a work of art.”

Each member of the Brady family was tasked to renovate one room in the home to make it look as close to what viewers saw on TV during the 1960s and ’70s. For 58-year-old Mike – who played Bobby – it was the master bedroom, which he joked was a bit of a challenge as his character never went in the room.

A Very Brady Renovation is set to air in the US in September.

Did you watch The Brady Bunch? Would you like to watch A Very Brady Renovation?