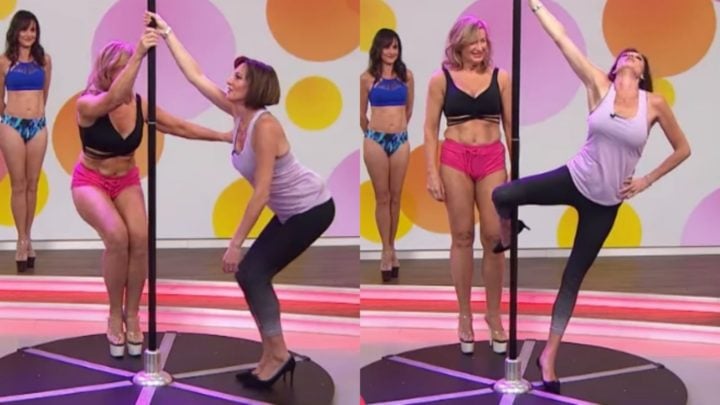 Cassandra Thorburn tried her hand at pole dancing during a segment on Studio 10. Source: Facebook/ Studio 10

Cassandra Thorburn has proved you’re never too old to have some fun, showing off her bold personality and stunning figure as she tried out pole dancing for the first time on national TV.

Karl Stefanovic’s ex-wife turned up the heat on Studio 10 this week as she stepped out in her active wear and a pair of killer heels during a live segment about the workout that is apparently being taken up by many over-50s across the country.

After watching a performance by a talented pole dancer, Cassandra decided do give it a go herself, confidently stepping up to the pole to try the striptease-inspired routine.

With the famous Tom Jones classic ‘You Can Leave Your Hat On’ playing in the background, the journalist followed the lead of the expert gyrating her hips with her hand placed firmly on the pole.

After mastering the technique the mother-of-three took things a step further by doing a fancy turn, before striking a pose against the pole and flicking her foot up in the air.

The last move showed off Cassandra’s flexibility as she flung her leg up and around the pole with her hand placed confidently on her hip.

“Ohhh,” an impressed Kerri-Anne Kennerley can be heard saying in the background followed by a rousing applause from onlookers.

The video, which has since been posed on social media has gained a lot of attention from fans who praised Cassandra for giving it a go.

“Great show. Can we see more of Cassandra? She is really good on the panel,” one person commented on Facebook. While another added: “Cassandra is great on the show and not afraid to try anything.”

Cassandra has been in the spotlight quite a bit of late, stepping out in a smoking hot outfit at a VIP launch party in Sydney earlier this year.

Pulling out all the fashion stops, the mother-of-three opted for a sheer printed blouse which she teamed with a chic figure-hugging black midi skirt and towering strappy heels. She finished off the standout ensemble with simple jewellery and wore her short locks out and straightened.

Cassandra appeared in high spirits at the event, despite claims that the journalist launched into a fiery rant about her ex-husband Karl Stefanovic late last year were confirmed, as audio of the interview was leaked online.

However, audio released on YouTube back in April appeared to have proven the original claims were true.

Throughout the clip Cassandra could be heard slamming her ex, mentioning everything from Karl’s wedding, to his apparent comments about “being the best journalist in the world”.

Are you a fan of Cassandra Thorburn? Have you ever tried pole dancing?