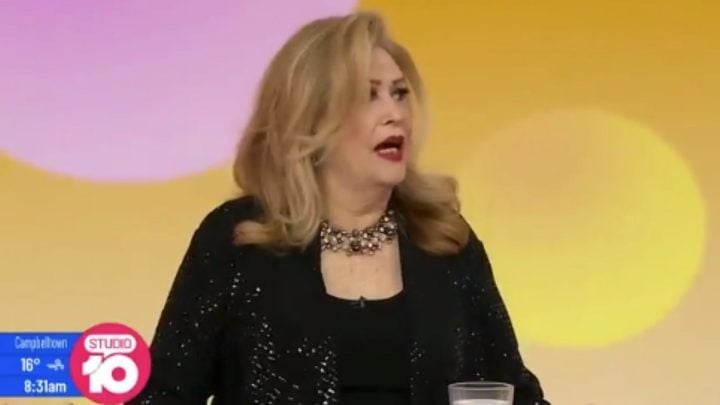 Carlotta made her return to program Studio 10 on Monday morning. Source: Twitter - Studio 10

She’s one of Australia’s favourite TV personalities and Carlotta made a sensational return to Studio 10 on Monday, just over one year since her emotional departure from the daytime talk show. And the 75-year-old, who has been entertaining Aussies for decades as a cabaret performer and TV star, took the opportunity to say her piece on a controversial new bill to allow transgender people to change their sex on their birth certificates.

Carlotta was born Richard Byron in 1943 and remains one of the country’s most well-known transgender people. At the height of the same-sex marriage debate, she used her platform on Studio 10 to explain that she’d been fighting her whole life for acceptance.

Now, after the bill to allow transgender and gender diverse people to change the sex listed on their birth certificate without surgery passed the Victorian legislative assembly on Thursday – its first hurdle in its fight to be fully passed in the state – Carlotta has shared her own surprising opinions on the debate – insisting it shouldn’t be allowed until the person has undergone a full surgical change.

“It’s different generation today but I really believe that unless you’ve had the sex change, then go again and have your papers changed… because anyone can do it,” she said, before turning to Sarah Harris and saying: “You could go in and say, ‘I want to be a boy’. and you’re not a boy. It’s ridiculous…”

"You got to be just proud of who you are."

Carlotta has her say on allowing transgender people to change the sex on their birth certificates, as Victoria is set to make it law in the state. #Studio10 pic.twitter.com/1WhU2r8xry

She added: “I have a lot of people writing to me about little kids, little girl wants to be a little boy or a little boy wants to be a little girl, and they go to school dressed that way. But what I’m against is the doctors putting these kids on treatments. They should not be put on treatments until these kids have matured and are of an age… Your hormones change. They could get to 15 and 16 and decide they don’t want to be. I’m only being sensible because I did it the hard way. When I had a sex change I went overseas.”

Carlotta explained that she was forced to get a passport printed with her new gender identity, but at that time she had to have a separate page in it with her old identity, so as not to cause confusion. She added: “It’s a different time today but I do not believe that they have the right to go and have their birth certificates changed when they haven’t had the changes.”

“Who else pulls off so much bling on a Monday morning, it’s the one and only Carlotta,” Sarah announced.

Joe also chimed in, adding: “It’s so good to have you back.”

“As I said darling I’m not dead yet,” Carlotta declared. Speaking to the Studio 10 hosts about her time away, she added: “I thought mummy needs to get back with a bit of political incorrectness. Mummy’s here because you know I say it how it is. I’m back honey, but I’ll behave.”

Carlotta is back baby, sequins & all! 🤩 #Studio10 pic.twitter.com/dh9O7RbH9e

Many viewers back at home were quick to congratulate Carlotta on her much-anticipated return, with one social media user writing: “Carlotta I’ve missed you. Welcome back.” Another added: “I’m already in stitches! Fantastic to have Carlotta back.”

While a third wrote: “Just want to say love love love having Carlotta back… have really missed her humour and honesty.” Meanwhile, another thrilled commentator wrote: “Delighted the wonderful #Carlotta is back on the panel.”

Carlotta, who is well known for her roles in Number 96 and Beauty and the Beast, previously quit the show in May 2018 before claiming producers had treated her “unfairly” in a damning chat with former executive producer Rob McKnight on his podcast McKnight Tonight.

“There was a lot of fabulous people, it was a tight-knit thing which we had at Channel 10, but when it all split up I didn’t enjoy it anymore,” she told him at the time. “And not only that, I was really treated a bit unfairly. I just think they tossed me around, you know, ‘we’ll use her there or use her there,’ and I felt a bit rejected so I did the right thing, I just quit.”

It comes after the star exclusively told New Idea last year that she recently overcame a cancer cancer diagnosis. The television personality admitted being terrified when she was told. Thankfully, the tumour was found early and she’s feeling healthier than ever.

The Number 96 star noticed there was a problem in March 2018 when she thought she had a simple urinary tract infection. When it didn’t clear up, she saw a specialist who confirmed there was a cancerous tumour growing in her bladder. The star underwent surgery to have it removed and explained that because it was discovered early by an oncologist, the disease hadn’t spread.

“I’m in the all-clear and feeling better than ever, but it was a big wake-up call to get things checked out the moment you feel something isn’t right,” she told the magazine at the time. “Mercifully, the disease hadn’t spread because my oncologist said it was discovered early.”

Are you a fan of Carlotta? Are you happy to see her back on Studio 10?