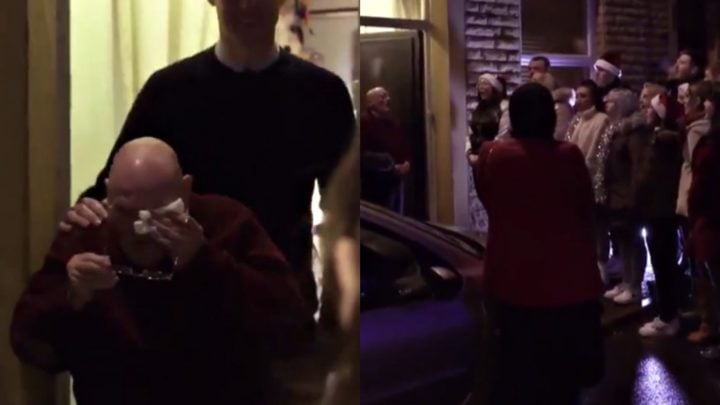 Christmas is a time for giving and one man in the UK received a gift he is unlikely to ever forget this week as he was surprised by kind-hearted college students on morning television.

The lonely pensioner, named Terrence, had previously spoken to BBC Breakfast presenter Dan Walker earlier this week and revealed that he has spent the last 20 Christmas Days completely alone, prompting the TV program to hatch the sweet plan to give the man a Christmas to remember.

Sweet footage of the surprise was shared on social media by the BBC and shows the moment that Walker arrived at Terrence’s home on Thursday, alongside a caption which read: “Terrence has spent the last 20 Christmas Days on his own. So #BBCBreakfast @mrdanwalker and @OldhamCollege wanted to bring him some Christmas cheer.”

The clip then shows the presenter sitting down to speak to Terrence about his plans for this December 25 – the first time he won’t have celebrated on his own for more than two decades – which he plans to spend with his 90-year-old friend Nancy who he met through working with charity Age UK.

Dan then reminds Terrence that they promised to sort him out a Christmas tree, before asking him: “Am I allowed to go and open your front door?”

The footage then shows a group of college students piling into Terrence’s living room and constructing a Christmas tree, as the pensioner begins to sob and says: Thank you … Thank you so much.” One student then tells him: “We brought you a Christmas tree to brighten your Christmas!”

Terrence has spent the last 20 Christmas Days on his own.
So #BBCBreakfast, @mrdanwalker and @OldhamCollege wanted to bring him some Christmas cheer 🎄❤️ pic.twitter.com/p5OSfFowlT

The surprises didn’t end there though as Walker then asked Terrence to name his favourite Christmas carol, to which he replied ‘Silent Night’, before leading him out into the street where the Oldham College Choir were waiting to perform the festive tune especially for him.

“If you come out here Terrence,” Walker says. “This is the Oldham College Choir just for you.”

As the group sing out the lyrics of the much-loved carol, Terrence can be seen crying and wiping his eyes in the doorway as he becomes overcome with emotion at the unexpected event.

Viewers admitted the broadcast reduced them to tears as they praised BBC Breakfast for making an effort to improve the man’s festive period. One viewer wrote on Twitter: “Happy Christmas! What a lovely story and lesson that kindness is all you need.”

Another said: “In a world of so much crap comes a few moments of joy. Well done to all involved. He will never forget this.” One commented: “Crying my eyes out. Amazing!”

While another said: “The kindness of others is the best gift you could ever get.”

Earlier in the chat Terrence opened up about how he used to spend Christmas with his late mother, taking a plated-up dinner and pillow case filled with gifts to her home each year. He said: “I’ll never forget her saying to me, she said ‘Do you know, without you bringing me my presents at Christmas, I wouldn’t have any presents, would I?’.

“I often think about that now. People who are on their own now don’t get any presents from people.”

Did this video make you cry? How will you be spending Christmas Day?