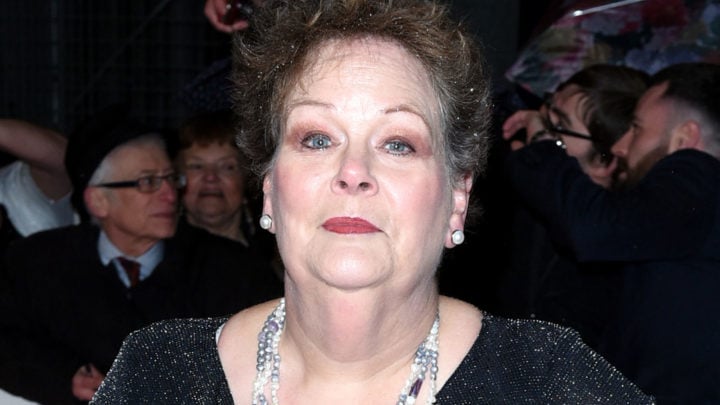 The Governess made the comment on new ITV show 'Beat the Chasers'. Source: Getty.

She is one of the most popular stars of ITV quiz show The Chase, regularly wowing audiences with her incredible general knowledge and quick wit, but Anne ‘The Governess’ Hegerty also has a rather cheeky sense of humour and the 61-year-old quiz master left Bradley Walsh blushing as she cracked a couple of rude one-liners this week.

Anne, who also appears on the Australian version of the hit show, made the X-rated comments during an episode of new quiz series Beat the Chasers on Tuesday night, as host Walsh introduced contestant Joel, who plays American Football.

The Governess quizzed Joel on his sporting prowess, asking the student what position he plays, to which he answered that he was a “wide receiver”, reports The Mirror. Never one to miss an opportunity to inject some humour, Anne then quipped that she herself has “been described as a wide receiver”.

Viewers of the show were left in hysterics over Anne’s comments, with many taking to Twitter to commend the TV star on her sense of humour. One person wrote: “Absolutely fabulous I was nearly a burden to the NHS at the wide receiver / tight end quip I choked on my Revel.”

Another commented: “@anne_hegerty saying she used to be a wide receiver is my highlight of lockdown tv so far. Love her.” Another said: “Anne, you stole the show tonight. I’m still laughing at your ‘wide receiver’ comment. I love this show already. Bradley is in top form too.”

One viewer said: “Anne Hegerty saying she’s known as a wide receiver just made me spit my brew out.” While another wrote: “Catching up on #BeatTheChasers and nearly choked on my wine with @anne_hegerty stating she’s been described as a “wide receiver” having previously being a tight end. I’m gone.”

The spin-off show – which also stars Mark ‘The Beast’ Labbett, Paul ‘The Sinnerman’ Sinha, Shaun ‘The Dark Destroyer’ Wallace and Jenny ‘The Vixen’ Ryan – sees the celebrity quizzers team up to take on four individual contestants.

It follows a similar format to The Chase as contestants build up their prize fund before being offered higher sums by the Chasers, however there’s a catch as, for each larger sum they accept, they must take on a higher number of pro quizzers in a timed head-to-head round.

Beat the Chasers is airing every night this week in the UK, it is not yet known whether it will air in Australia.