While baby names are discussion of the day with our newest royal being named George Alexander Louis overnight, lets talk about whether you like or dislike your own name, after all, you’ve lived with it for over 60 years. 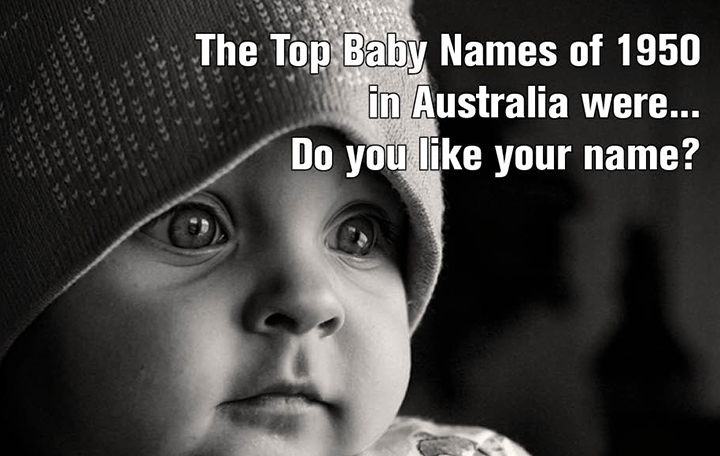 The top twenty names for boys and girls born in 1950 were, well, rather simple, plain even by today’s standards.  But many came from strong roots in language, from all corners of the world.

You may have been named after a family member from generations before like Charles or George, a sporting hero, like Don or Lionel or a flower like Lily or Rose.  No doubt, the older generation has a greater knowledge of the meaning of their name, for instance, did you know John is Hebrew meaning God is Gracious, Alfred means Counsellor and Richard translates in German to Strong Ruler.

Nancy, is Hebrew for grace, Sandra another Hebrew word for Lily, and Karen a Greek name meaning pure.  Names today seem to have lost some of their inherent meaning, instead favouring favourite places loved by parents, TV stars, or even denim brands.  My daughter is named after the place my husband and I were engaged, Paris and her middle name carries the tradition of a derivative of her Grandfather’s name; her sister carries my grandmother’s name as her middle name; my son his grandfather’s as his middle name too.   For us it was a respect thing, but also a sign of adoration for our grandparents.

We all know there are names we would never want to have, usually because we associate someone we don’t like or trust with the name.  I know a Mick that I don’t trust so sadly, all the name Mick gets tarnished with this brush for me. And Fiona, well I was never a fan of her at school so I have had that stick with the name forever.

Your parents picked your name in a very different era.  Do you know the meaning of it and why they selected it?  Do you like your name?  And does it hold any traditional significance.