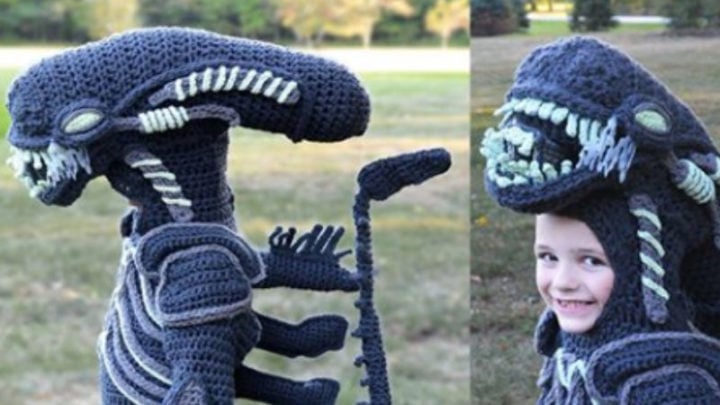 A mother's impressive crochet costumes have sent the internet into a spin, featuring everything from xenomorph alien to a clown. Source: Facebook/ Crochetverse

With Halloween fast approaching your grandkids are no doubt on the lookout for creative costume ideas to scare the neighbours and impress their friends. But while the shops are the usual place to start when creating an outfit, one mother has shown an impressive level of talent by using her craft skills to make a series of ensembles for her kids.

Instead of gluing together bits and pieces, the young mum has sent the internet into a frenzy with her full-body crocheted costume designs. While creating a jumper or beanie is impressive in itself, Stephanie Pokorny has taken things a step further by making entire outfits free-hand, without a pattern in sight.

However, it’s not just a hobby she uses at Halloween job as the mum has established a whole social media page to show off her crocheted characters created all year long. Focusing on characters from iconic 1980s movies, Stephanie has made everything from Xenomorph from the Alien series, to Slimer from Ghostbusters.

Ready for #2?! XENOMORPH ALIEN! 💀 Jake's choice and he has been asking, no BEGGING, since Predator, so here it is! Absolutely so excited with the result! Suspended tail ready to strike, coils, spikes, spines, and that DROOL! Alien overload! Icing? HE GLOWS IN THE DARK! You so must head to my page for the video, I promise it's worth it! So… tell me what ya think!! 😱 . . About 45 hours of work, fully freehanded, NO patterns. His face sits inside the neck of the alien so he appears full body, but vision is clear! #xenomorph #alien #predator #alienvspredator #crochet #cosplay #halloween #halloweencostumes #crochetcostume #instacrochet @ripleysbelieveitornot #diycostume @comics_artuniverse #avp

Xenomorph is one of the mum’s most recent designs with her young son modelling the outfit in a post on Instagram. The costume shows off Stephanie’s incredible skills, featuring a suspended tail, coils, spikes, spines and of course the drool. Even more impressive is the fact that the costume glows in the dark.

This was the mum’s second costume from the Alien series having previously created Xenomorph’s rival Predator. The one of a kind outfit featured just as much detail as Xenomorph with Stephanie’s son clearly impressed with the ensemble in an adorable photo online.

PREDATOR!!!!! My son saw the movie with his dad and was obsessed. I am obsessed with crochet. So this is the result. I am kinda freaking out!!!!!! 😍😍😍😍😍 #crochet #cosplay #predator #predatormovie #costume #crochetcostume #instacrochet #crochetaddict #yarn #freehand #80skid #80smovies #halloween #halloween2018 #crochetverse #maker #diy #handmade #handmadeisbest #oneofakind

The mum’s talent clearly has no limits with other outfit designs including an absolutely adorable garden gnome, Skeletor from the Masters of the Universe franchise and Pennywise the clown from the creepy It film.

On each post Stephanie explains just how much work has gone into each design with most taking between 20 to 45 hours to complete. The Skeletor costume alone took around 45 hours of free-hand work all up, making for a very long process.

IT'S COSTUME TIME!! 💀 Introducing SKELETOR!! Jack's pick this year and I am so excited my stomach hurts! He is fully freehanded, no pattern. Those eyes? They light up for an extra evil touch! Muahahaha! Want to see a video? Come to my page & see, it's so cool! What do you think? Happy 1st day of Halloween! 😘🎃 About 45 hours of freehand work for him ♡ All the facial details are top of head/forehead so chin down he is fulllll body scary; head up vision is clear! We live in Ohio so that coziness of crochet is always so welcome on brisk (sometimes snowy!) Halloweens! I adore doing this for my babies, thanks #skeletor #heman #costume #crochetcostume #instacrochet #crochetaddict #yarn #freehand #80skid #80smovies #halloween #halloween2018 #crochetverse #maker #diy #handmade #handmadeisbest #oneofakind #cosplay

“Jack’s pick this year and I am so excited my stomach hurts!” the mum wrote about the scary, yet incredible creation. “He is fully freehanded, no pattern. Those eyes? They light up for an extra evil touch!”

She added: “About 45 hours of freehand work for him. All the facial details are top of head/forehead so chin down he is full body scary; head up vision is clear! I adore doing this for my babies.”

Speaking about her love of craft recently, Stephanie explained she has been crocheting since she was a teenager, with the hobby quickly becoming one of her main passions. In a post shared on Bored Panda the mum said: “I have been crocheting since I was 16. I was taught by my grandma and these creations are my passion.”

She continued: “My mother made my costumes for me as a child and I remember being beyond exciting to wear them. It brings me such joy to be able to do the same for my children.”

Stephanie has established quite a following online with over 11,000 people keeping tabs on her account and most recent designs. The majority are absolutely dumbfounded by the mum’s talent, with many leaving comments of admiration for Stephanie. “Omg you’re my hero!” one person wrote on Instagram. “I aspire to crochet unique costumes for my kid like this!”

While another said: “Let me know if you are ever willing to make a custom for my six year old he would freak for this.” And a third commented: “This is one of the coolest things I have ever seen.”