Get crafty to help injured and orphaned animals amid bushfire crisis 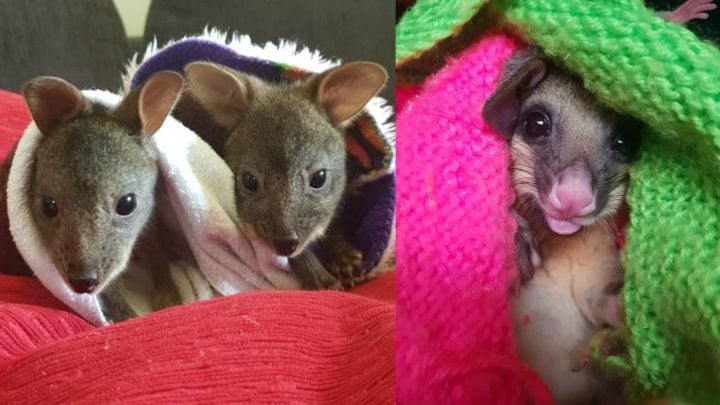 People across the world are knitting, sewing and crocheting items for animals impacted by the Australian bushfires. Source: Facebook/ Animal Rescue Craft Guild

As bushfires continue to ravage the country, people across Australia and around the globe have opened their hearts and wallets by donating to those in need, with tens of millions raised in a matter of days. But it’s not just money that’s being donated, with the crafty types among us furiously knitting away to help injured wildlife.

It’s been estimated that nearly half a billion animals have been killed in the bushfires, while many others have been left with no habitat to return to. As a result, people have shown their support by creating protective pouches, blankets, nests and mittens for injured animals. The Animal Rescue Craft Guild has been bombarded with thoughtful requests to assist during the crisis, from as far away as Italy, Germany and Hong Kong. The Facebook group was created a few months ago and has since gained over 100,000 members, and is filled with photographs of the cosy items that have been created for Australia’s wildlife.

“Hi from Canada!” Anita LeHay wrote on Facebook alongside a photo of her creation. “Here are my first ever bat wraps. These are fun to make and I am so relieved to be able to help in some way. I’m going to make joey pouches next. Sending all our love from Canada.”

“Crocheted five of these nests ready to post from the UK,” Jenni Edwards said alongside a snap of her thoughtful gift. “Totally heartbreaking watching all the wildlife suffering. Keep doing what you’re doing Australia… amazing work. Sending you all my love and prayers.”

Meanwhile, Alison Rouse-Cramp shared a photo of one of her creations being used by an adorable little joey.

Information on items that are most needed are detailed on the page, as well as patterns to assist with creating them. There is currently a very high need for joey pouches and hanging pouches, while bat wraps, bird nests and boxes for birds and possums are also required.

Although thousands of koalas have been injured in the bushfires, the not-for-profit group has stressed there is no need for koala mittens at this time, as they have been inundated with donations over the past few months.

Those living overseas can help by donating money to cover postage costs, fuel and craft materials, or have finished items taken to Australia by travellers on their way down under.

WIRES Wildlife Rescue also made a call for donations of pouches, requesting they be lined with pure cotton or flannelette for ultimate comfort.

Do you enjoy knitting? Have you made anything for the animals impacted by the bushfires?