Calling all stargazers! You can spot three meteor showers this month 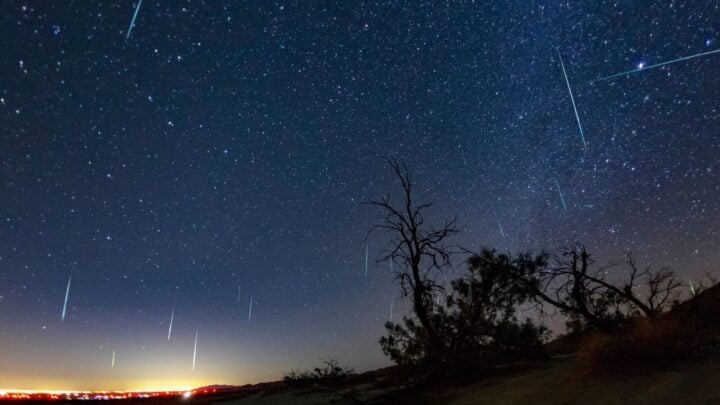 If you've never seen a shooting star, October is the month to give it another try! Source: Getty.

It’s a jam-packed month for astrology enthusiasts as a trio of meteor showers are said to shake things up for a few star signs in the coming weeks. The unusual celestial spectacle will see the meteors grace the skies over the next two weeks, which will have significant psychological and spiritual flow on effects according to astrologist and psychic Rose Smith.

According to NASA, meteor showers occur when pieces of meteoritic material fall and are vaporised in Earth’s atmosphere leaving a bright trail behind them. In other words, it’s a whole lot of impressive shooting stars. These are pretty rare so to have three in one month is quite a special event according to Smith.

“We need these meteor showers,” she said. “With all the chaos, disruption and change going on in the world at the moment, people are generally feeling very anxious and strong celestial activity is a sign of hope.”

And although they can last several days to weeks, the visuals usually peak on a particular date. This month, the first active shower will be the Draconids which will peak tonight on October 8, then the Southern Taurids will come this weekend on October 10 before the final shower known as Orionids will appear on October 22. All three will be visible throughout Australia however the first shower may only be seen by lucky stargazers in the north of Brisbane.

This meteor shower is said to be the only display of shooting stars for the year which look best right after sunset. There should be about 10 shooting stars per hour across the sky however it may only be visible from the north of Brisbane.

When it comes to the spiritual impacts, this shower is likely to impact Librans. According to Smith, the Draconid’s link to the constellation Draco the Dragon indicates that there could be some real physical changes involving power in the month of October.

This shower will produce bright, slow moving meteors, making it easy to spot with the naked eye. There should only be around five meteors per hour but get ready for a show because they could be showing off explosive colourful fireballs that are often referred to as ‘Halloween Fireballs’. It’s said the shower will peak at the weekend but should be running all month with the best visibility being at midnight.

This shower is likely to target Taureans more strongly than other star signs and is linked to power, royalty and also psychic ability. Smith says this particular shower could herald some explosive times especially for leaders and authority figures as “secrets are revealed and those who are finally lost find their way”.

This shower comes from Halley’s Comet’s debris stream and should look best in Australia’s north to north east sky with about 20 meteors per hour starting an hour before sunrise and peaking on October 22.

According to Smith, those in the Gemini star sign will cop most of the spiritual impacts from this shower which is going to be connected to changeable weather, stormy conditions and arrogance. However, on the positive side, the Orionids will also be linked to fortitude, alertness and unflagging energy despite trials and challenges.

Do you like to star gaze? Do you believe in astrology?