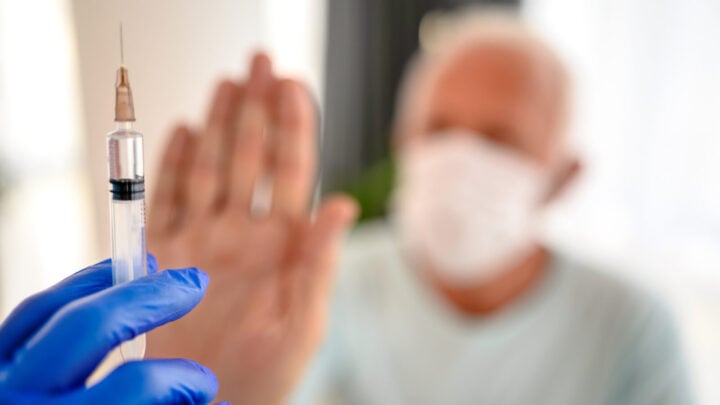 Data has revealed we think the vaccine should be compulsory, despite also saying there are both medical and social reasons why we shouldn't get the jab. Source: Getty

As Australia grapples with its worst Covid-19 outbreak this year, people are questioning whether the situation could have been avoided if more people were vaccinated, prompting criticism of the country’s apparent hesitancy around getting the jab. Government figures indicate about 6.11 million people over the age of 16 (about 30 per cent) have had a single dose and just 1.63 million people, or 7.9 per cent, are fully vaccinated.

In May, a survey suggested that one-third of us would not be getting the vaccine. Now, new research on vaccine hesitancy by CoreData Australia – which polled more than 1,600 Australians – found that 85 per cent think there are good reasons to avoid the Covid-19 vaccine push. Of that figure, 61 per cent cited medical reasons and 24 per cent said it’s a matter of freedom of choice. CoreData Australia said it reflects just how fragile the push to vaccination is in Australia.

Surprisingly, though, the same survey also found that 69 per cent of Aussies thought the vaccine should be compulsory, and that those who aren’t getting vaccinated are selfish.

When it came to breaking down the data into generations, it revealed an interesting insight into the way older Australians are thinking. The research showed that the most likely age group to think the vaccine should be compulsory were those aged over 77 (the pre-Boomer Silent Generation), who were also the most likely to think those not having it were selfish. As the most at-risk group, the results are understandable.

Next were the Baby Boomers, with about 74 per cent believing it should be compulsory, while just over 70 per cent thought it was selfish not to get it.

Interestingly, it was those aged between 27 and 55 who seemed to be on the fence about compulsory vaccination. The youngest, Generation Z (aged 26 and below), showed similar thoughts to the older generations, with more than 71 per cent saying the jabs should be compulsory.

Andrew Inwood, CoreData’s global CEO, said it’s clear that Australians don’t really understand the role of vaccines, the risk of vaccines or the economic impact of low vaccination rates, saying the results showed that anti-vax and social-liberty messages have found fertile ground, while scientific and rational debate are rendered moot.

“The driver for the research was the latest lockdown in NSW. We wanted to see whether the low vaccine rate was a question of supply, or if there was genuine vaccine hesitancy in the country,” he said. “The UK is opening, the USA is opening and even Singapore is open, while Australia is wedded to the idea of a zero-case baseline, which is ridiculous.

“We should be focused on a swift and efficient rollout of the vaccine – just like the USA and the UK – which, according to the latest data, have a death rate from Covid-19 at the same level as the normal flu.

“Vaccine hesitancy is very expensive. It costs about $143 million a day to shut down NSW. We are going to go 21 days this time – that’s a lot of schools, hospitals and roads that have been sacrificed to vaccine hesitancy.”

Did these survey results surprise you?