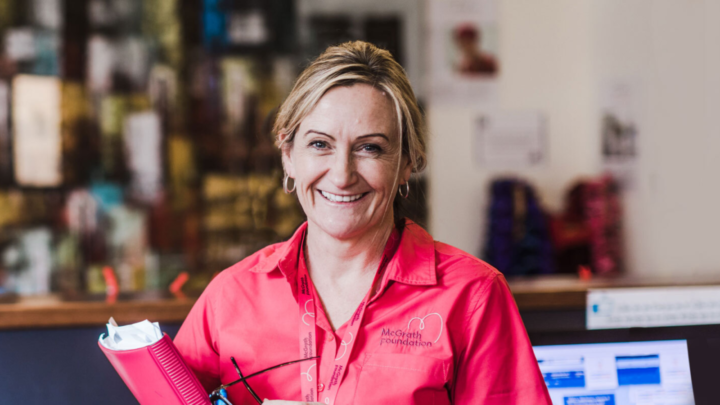 No one should go through breast cancer alone. From the time of diagnosis through to treatment, McGrath Breast Care Nurses support patients and their families every step of the way. Image source: McGrath Foundation

Irene Halmans did not get the help of a McGrath Breast Care Nurse but her family is adamant that no one else has to go through breast cancer without the vital care and support of one. It’s why her husband, Henry Halmans, and her sister, Kaye Rehm, have decided to leave a gift in their Wills to the McGrath Foundation in her memory.

Irene was strong, stubborn and had a heart of gold. From an early age she knew she would be a teacher and eventually, she found her niche helping primary school children with special needs. While Irene may have been petite, her personality made up for her stature. Her loved ones all agreed that she embodied the saying that good things come in small packages.

She developed breast cancer in 1996 and 2004, before the McGrath Foundation grew into the charity it is today. Her husband Henry, 70, believes that if Irene had the help of a dedicated McGrath Breast Care Nurse, it would have helped her navigate early breast cancer as well as her metastatic diagnosis that was incurable.

“If these guys were around when Irene needed them, I’m not saying the outcome would have been any different, but at least there would have been someone there that she knew she could pick up the phone and call anytime,” Henry says.

“She didn’t have that. These days, if anyone else out there is in that situation, they can easily ring a McGrath Breast Care Nurse and they’ll sort you out.”

Kaye Rehm, 65, was Irene’s younger sister. “We were better than friends and would finish each other’s sentences, we knew what the other was thinking. I called her Rene when we were little kids and in later years it stuck, we all started calling her Rene” she says.

What Kaye didn’t see coming was Rene’s passing, she thought her strong, stubborn sister would just keep on keeping on like she always did.

“We saw her go through the first round of chemo and she wouldn’t say no to anything, she would make out she was alright and never complained. The secondary cancer seemed to creep into her back at first, we only realised it was there after a few check-ups. It tried to travel into her lungs and found its way into her liver, that’s when she got really, really sick. I saw Rene nearly every day, but I didn’t see that she was dying whereas Henny (Henry) knew it was any day. I just didn’t think that it was going to happen” shares Kaye.

The power of having someone in your corner

Kaye also thinks about the difference a McGrath Breast Care Nurse would have made to Irene’s life.

“We all knew who Glenn McGrath was and heard the story of his beautiful wife, Jane. I don’t believe the McGrath Foundation was even in operation the first time Rene was sick, the second time I think there was probably only two nurses in Sydney. The nurses Rene had at the hospital were wonderful and sometimes you were given a brochure,” she recalls.

“There was absolutely nothing like McGrath Breast Care Nurses at that time. It would’ve been a helluva different world for her if there had been. As close as we were, I couldn’t offer her words of support or give insight into what happens next. It was very much whatever you were told by your oncologist and what the next step was. Once you had your scans or doctor’s appointment, you just went home.”

No cancer treatment is without its challenges but having a McGrath Breast Care Nurse you can rely on can make a big difference.

McGrath Breast Care Nurses are professional, registered nurses who are specifically trained to manage the care of people diagnosed with breast cancer. From the time of diagnosis right throughout treatment, McGrath Breast Care Nurses are a trusted and knowledgeable point of contact to help inform, organise, empower and support patients and their families. Most importantly, they offer emotional support during what can be a very difficult time.

Henry and Kaye have both chosen to support the McGrath Foundation through a gift in their Wills.

He explains that he doesn’t have any children and he didn’t think it was that unusual to leave a gift to charity.

“I thought a lot of people did it. When I’m gone, it’s no big deal. You can’t take it with you.

“Rene didn’t have anything to do with the McGrath Foundation, but I wanted to be able to say to her, ‘Rene, even though we’re gone at least we’re still doing something’.

“Maybe there’s a lot of people out there like me who want to leave money in their Will to charities but think they have to leave it to the family. I’m not saying give the whole shebang over, but even if you leave five per cent or whatever, it helps,” he says.

“The only time you hear about donations is when millionaires give to big medical institutions or hospitals, but you don’t have to be a millionaire to make a difference. Anyone can make a donation, it doesn’t have to be everything, whatever you think is a fair thing.”

Just like Henry, Kaye also wants to talk about her decision to include the McGrath Foundation as a beneficiary in her Will.

“As I don’t have children, it was an easy decision. I understand why people leave things to their children and try to help them, but I don’t know if I would’ve felt obliged to look after them if they were going OK and had their heads screwed on,” she says.

“It’s probably one of the best decisions I’ve made and it’s given me a real sense of contentment.”

A message from the McGrath Foundation

Breast cancer affects over 20,000 Australians every year, making it the most commonly diagnosed cancer for Australian women. Leaving a legacy gift like Henry and Kaye will directly support families experiencing breast cancer to help ensure that no one in the future misses out on the care of a breast care nurse.

Leave a gift in your will