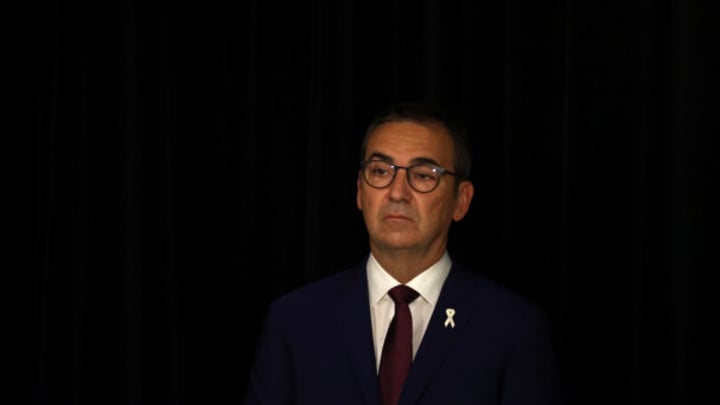 South Australian Premier, Steven Marshall, has revealed he is on a new diet after feeling a little ‘under-muscled’ compared to his opposition, Labor leader Peter Malinauskas, and his sexy physique.

The Premier admitted he is now on a strict keto diet after seeing a shirtless photo of his opponent, Labor leader Peter Malinauskas, as he rocked washboard abs and some seriously jacked-up biceps.

The admission came during the South Australian Press Club leaders debate on Thursday, March 11, where both leaders answered a number of questions from ABC Radio Host, Stacey Lee in a media event to promote the upcoming election.

During the interview, Lee enquired about the leader’s bread preferences, asking the men what type of bread they fancied and how much it cost to buy, a snarky throwback to when Prime Minister Scott Morrison revealed he was clueless in regard to bread pricing.

Malinauskas was the first to volunteer his preference, admitting wholemeal bread was his go-to and revealing it cost between $3.50 – $3.60 a loaf.

“I find myself munching on the wholemeal version of Wonder White,” he said.

Marshall, on the other hand, admitted he didn’t eat bread anymore, revealing he was on a keto diet – a high fat, low-carb diet that helps people lose and manage weight.

“This is a little bit humiliating,” he confessed.

Marshall went on to candidly reveal his new diet was inspired by none other than this abbed opponent, Malinauskas.

“I had a look at the paper the other day,” said Marshall, pointing to Malinauskas as he explained, “I knew I had to do something” while the audience broke out in laughter.

Marshall’s confession comes after a series of shirtless images of Malinauskas emerged of the Labor leader last month, revealing his delightful, carved-up physique.

The Premier made sure to chuck in a cheeky jab at his opponent before Malinauskas could receive too much attention.

“Look, it’s great when people look after themselves and stay healthy…. but he’s clearly got a bit more time on his hands than I have,” said Marshall, throwing some harmless shade at his opponent.

He then made a subtle reference to Russian President Vladimir Putin as he admitted feeling “shame” upon seeing his opponent’s envious body.

“There’s no Putin-style campaigning from me, I can guarantee, I’m just focused on the key issues of South Australia but, yes, I did have to hang my head in shame when that photo went up… I thought to myself, ‘Right, that’s it, no more carbs,'” said Marshall.