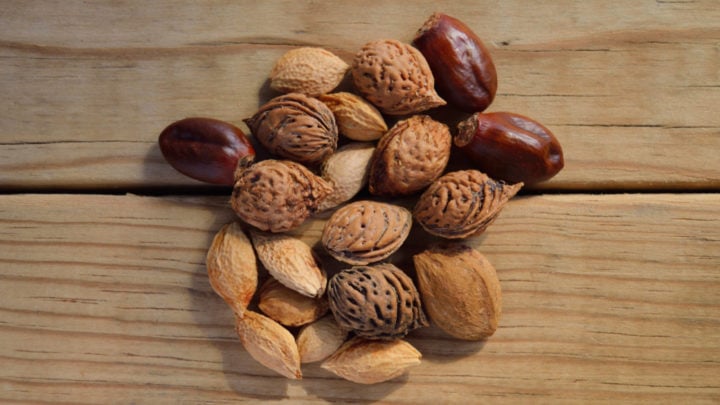 A handful of nuts can boost your energy levels. Source: Pexels.

They’re the unsung hero of general health but a recent study has finally given nuts the recognition they deserve, finding that regularly consuming them can significantly reduce the risk of death from cardiovascular disease by as much as 17 per cent.

The findings were presented at the European Society of Cardiology Congress and confirmed that simply increasing your nut intake from every two weeks to twice a week could reduce the risk of dying from heart disease, which is also currently Australia’s leading cause of death. As they present such a great source of unsaturated fat, protein and fibre, the dietary guidelines suggest eating a minimum of 30g a day for those looking to improve their heart health over time.

With decades of research already indicating the connection between nut consumption and an improvement in cholesterol, this new information now gives hope not only for those looking to maintain a healthy heart but also potentially those with ongoing heart problems.

Belinda Neville, a dietician at Australia’s leading nutrition authority on tree nuts, Nuts for Life, spoke to Starts at 60 about all of the lesser-known benefits that can come from simply increasing your daily intake of nuts – and why she believes this is an issue that needs more national attention.

“For such a small food I think it’s something that’s often forgotten in the diets of Australians,” she says. “We’ve recently done some research which shows that Australians are missing out on the health benefits of nuts because only two percent are eating that 30g a day. Given all the health benefits of nuts, we just encourage people to try to consume a regular handful every day and try to think about nuts just like they would about fruits and vegetables.”

Along with heart health, Neville says there’s an extensive list of health benefits that nuts help to promote including diabetes, brain health and cognition. She adds: “I can’t think of any negative health implications arising from eating nuts. I can only comment that nuts have been associated with health benefits and that’s why we encourage them to be incorporated into a healthy diet.”

There’s no single type of nut that is considered better than another, however other individual health issues might have an impact on how the nuts can be consumed. Neville says that those who struggle with hard foods or have sensitive teeth might be better opting for a softer nut like walnuts for example.

She also suggests that those who aren’t a fan of full nuts can incorporate chopped nuts, nut pastes or nut meals into soups, porridges or stir-fries to conceal the flavour. Doing this will still provide the same benefits, however be aware that it could have some impact on weight change.

“The only major difference is when a nut has been chopped down, you’re more likely to absorb all the energy and all the fat content. Whereas, if you have nuts in their whole form, you tend not to absorb this much energy and fat because some of the fat is stuck in the fat cells and our bodies can’t access it,” she explains. “Which is why one of the theories out there is that those who eat nuts don’t tend to necessarily increase their weight.”

As for those who are worried about enjoying too much of the tasty snack, Neville assures there’s nothing to worry about, adding: “It’s probably hard to overindulge in nuts, the reason being because they’re full of good fats, they contain fibre and protein and those nutrients or that complexity in the nuts help us to feel full. So it’s less likely that you’re going to overindulge in nuts because you probably physically can’t tolerate that many nuts without feeling really full.”

For those who are just kicking off their nut journey, it’s important to remember it’s not a sprint and the results are not something that will be felt straight away. Instead, it can take around four to five months to see improvements in cholesterol, and even longer to reap the full benefits for heart health.

Neville reminds people to stay patient and diligent with their consumption, adding: “We never like to look at these things as a magic bullet solution, you know the whole idea of ‘have nuts and in two months you’ll be fine’. It’s a lifestyle change. So what we encourage people to do is include nuts regularly in their diet as a part of a healthy lifestyle.”

Do you eat the recommended amount of nuts each day? Will this encourage you to eat more?