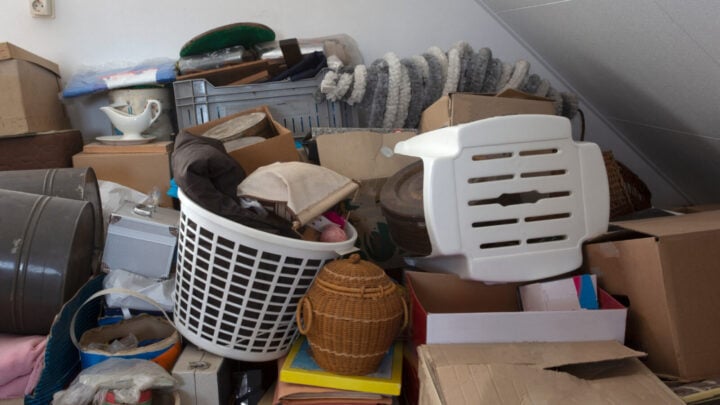 Hoarding is a major health and safety risk, so it needs to be addressed as soon as possible. Source: Getty.

When you picture a hoarder, a compulsive shopper or a messy person may come to mind, but what you may not know is that hoarding is classed as a serious mental health disorder and has nothing to do with being untidy or lazy or having extra items around your home.

Some health experts, such as Professor Jessica Grisham, an academic clinical psychologist from the University of New South Wales, are concerned that hoarding isn’t being treated as seriously as it should by the public, and she is now on a mission to break the stigma associated with hoarding and raise more awareness for the generally misunderstood health condition.

“It’s a myth that people who hoard are just lazy or messy,” she says. “Hoarding disorder is a treatable mental health condition and we need to make the public aware of that and remove the stigma.”

And it’s more common than you’d think. According to Professor Grisham, an estimated 2.5 per cent of people suffer from the condition, and it’s also a serious health and safety risk.

“A Melbourne study in 2009 showed hoarding fire incidents accounted for only 0.25 per cent of all residential fires but 24 per cent of preventable fire fatalities during the same period,” Professor Grisham explains. “And NSW Fire & Rescue states that 12 per cent of all fire fatalities in NSW are people reportedly living in hoarding and squalor conditions. These tragedies show just how acute the issue is.”

What is hoarding disorder?

According to Professor Grisham, people with hoarding disorder have an extreme, emotional attachment to objects. “So, a person who hoards is excessively attached to their belongings and this prevents them from discarding those items, leading to a huge amount of clutter in their homes — to the point they are unable to live or function the way other people do.”

There’s a big difference between someone who has just let their stuff get out of hand and a hoarder, with Professor Grisham explaining that while a non-hoarder will have no issue with the mess being tidied up, a person with hoarding disorder will.

“Many people relate to having a disorganised space or a bit of extra clutter, but they are otherwise able to function properly in their home and would be happy to have the mess tidied up and the rubbish thrown out,” Professor Grisham adds.

“The difference with someone who has a hoarding problem, however, is their extreme emotional attachment to things. They would feel very upset or threatened if anyone tidied up, cleaned or removed their objects.”

How to help a loved one who hoards

Helping a loved one who hoards is no easy feat. The good news is, Professor Grisham has listed her top tips, with her number one piece of advice being to avoid arguments and seek their permission first.

“Massive clean-ups cause huge distress to the person [with this disorder] and they generally will start hoarding again if everything is forcibly removed,” she says.

You may also want to be prepared for mixed feelings or contradictory ideas, she adds, as many people with hoarding problems are usually unmotivated or ambivalent about seeking treatment.

To get your loved one onboard, Professor Grisham recommends pointing out the health and safety risks: “For example, bring attention to fire hazards, blocked toilets or covered electrical outlets.”

She also advises discouraging family or friends who may be contributing to the problem, saying: “Well-meaning family or friends can sometimes do things to prevent distress in the person who is hoarding, but they actually contribute to the problem by, for example, driving the person to a car boot [or garage] sale, dropping off charity donations at their house, or giving them unwanted things like magazines or newspapers.”

Lastly, people who hoard often have co-existing physical and/or mental health problems — for example, physical disability, chronic fatigue, arthritis, obesity, depression or anxiety — and, if that’s the case, she reckons evidence-based treatment programs can help to address these challenges in conjunction with the hoarding problem.

If the person agrees to seek treatment, Professor Grisham says they should be directed to ask their GP to refer them to specialist hoarding treatment providers.

Do you know someone who hoards?