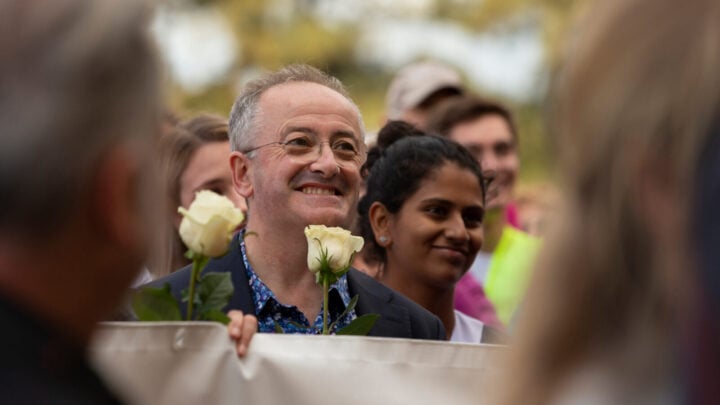 Andrew Denton has spent the better half of the past decade campaigning for voluntary assisted dying (VAD) laws in Australia. Source: Getty

Andrew Denton has seen both sides of the story — people who desperately wanted voluntary assisted dying laws but didn’t have access to them, like his father Kit, who suffered a slow and painful death, and those who did have access to it, like motor neurone disease sufferer Robert Caliste — who was able to say goodbye to his family and friends before he slipped away peacefully and pain free.

Their deaths couldn’t have been any different, and their stories, and others like them, are the backbone of the campaign to legalise euthanasia around Australia.

Robert was first diagnosed with a neurodegenerative disease in May 2017, at the young age of 34. In November 2019, he became the youngest person to die under Victoria’s voluntary assisted dying (VAD) laws.

“He didn’t want motor neurone disease to win,” Robbie’s parents John and Michelle tell Denton in his podcast Better Off Dead. “He didn’t want to be literally that prisoner in the body and looking at you with his eyes. It had done enough damage to him and he knew what the outcome was going to be.”

Denton says Robbie’s story is a perfect example of why VAD laws are so important, and says more people are starting to see the benefits as well.

“I’ve seen more and more people step forward, particularly within the medical profession and say ‘no, we do need these laws’,” Denton tells Starts at 60.

According to Go Gentle Australia, the assisted dying advocacy group established by Denton in 2016, 85 per cent of Australians support VAD laws.

“If someone is dying and they’re suffering and you can’t help them, then you should [be able to] offer them a merciful choice, and I think most people get that,” he says.

While there are those that still argue assisted dying is a form of suicide, Denton says it couldn’t be further from the truth.

“This is a choice of how you’re going to die, not an act to die,” he says.

The right to choose

More than 130 Victorians applied to end their lives in first six months of state’s assisted dying laws becoming legal, far more than authorities had expected. Since then, Western Australia and Tasmania have both passed VAD laws, with the new laws coming into effect from July 1 this year in WA, and in the next 18 months for Tassie. Meanwhile, Queensland and South Australia — and possibly New South Wales — are expected to vote on the issue later this year.

While euthanasia has always been a topic of interest in Australia, the country’s ageing population pushed the issue to the forefront in recent years. Many Australians aren’t having the end-of-life experience they want or deserve, and intensive care and palliative care units are flooded with people in their 80s and 90s waiting out their final days in hospital rather than people able to pass peacefully in their homes.

Denton says the majority of families he’s spoken to describe their loved one’s experience with voluntary assisted dying as “beautiful”.

“They are so grateful, not just for the manner of the passing, but the things that happen beforehand, like the farewells they’re able to give,” he says.

“Just recently, I spoke to the daughter of a woman, who was 82 and had a neuro-degenerative disease, and she described how before she used assisted dying to die, the whole family gathered around her for one last afternoon.

“She sent me a photo of that gathering and you can see this woman, who’s clearly very ill, surrounded by her children and grandchildren, and there’s smiles everywhere, it’s just a beautiful photo.”

One of Denton’s close friends also recently made the decision to end her life after suffering through pancreatic cancer.

“I was stuck in New South Wales, she was down in Melbourne,” Denton recalls. “So my wife and I knew the day and the exact hour that our friend was going to die, and even though I know this subject intimately, it was still very emotional. And we sat and drank a toast to her at that moment.”

For those who advocate for legal euthanasia, the right to chose when, where and how we die is paramount to a free and fair society. But while taking control of our own death is empowering, Denton acknowledges it’s no golden ticket.

While some Australian states have passed VAD laws, and others are looking to do so, there is still work to be done for Denton and his team. Part of that work involves raising awareness for the cause through Denton’s podcast Better Off Dead, which is currently airing season two.

While the first season saw Denton spend 18 months crisscrossing Australia and travelling the world, talking with doctors, nurses, politicians, priests, lawyers, opponents of assisted dying, as well as the dying and their families, season two looks at what happened in Victoria after the VAD legislation came into effect in June, 2019, and taps into the personal stories of families that used the laws to help their loved ones find peace.

Listen to season two of Better off Dead here.