Apple cider vinegar: Are there any real benefits? 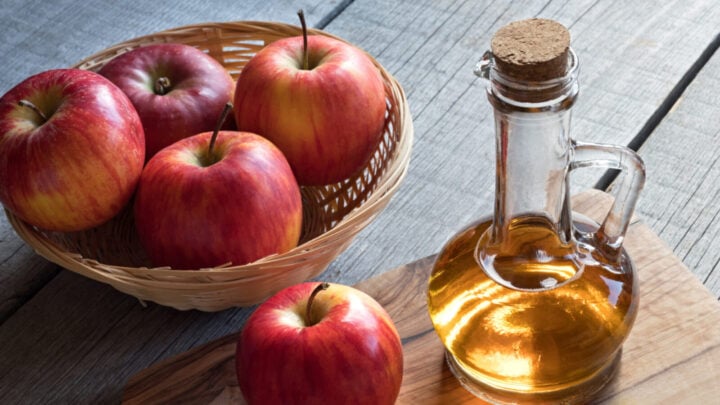 People have raved about the benefits of apple cider vinegar, but how can it actually help you? Source: Getty

Health trends come and go as quickly as we can click our fingers, with the likes of kale, quinoa and other hard-to-pronounce ‘super foods’ popping up on our social media feeds and on television screens year in, year out. Some seem convincing, with promises of boosting your nutrition and energy levels, while others just make you shake your head and think ‘can this really be a thing?’

But one trend that seems to have withstood the test of time is apple cider vinegar (ACV). While the thought of regularly taking something so sour tasting may sound odd, many do it on a daily basis in the hopes of supporting their health. However, the question remains, is ACV really doing you any good, or will it simply ruin the enamel on your teeth and have you spending far too much money at your next dentist appointment?

Well we’re here to answer that for you. But first, what exactly is ACV and what is this so-called ‘mother’ that it contains? According to the University of Chicago Medicine, the ‘mother’ is a combination of yeast and bacteria, which is formed during the fermentation process. It can actually be seen in a bottle of ACV, appearing like cloudy strands in the fluid. This ‘mother’ is considered a probiotic, but the effect this has on a person’s wellbeing is yet to be established by research.

As for the benefits ACV could give you, the University of Chicago Medicine adds that it has a similar vitamin profile to regular apple juice, meaning it’s full of  polyphenols (plant-based antioxidants) and B vitamins, which are said to assist with energy levels, brain function and cell metabolism. So that’s certainly a plus!

But some research suggests ACV can provide more. According to one study published in the Journal of the American Association of Diabetes, consuming a small dose of ACV after a meal helped to significantly lower blood glucose levels in many people, meaning it could assist those living with diabetes.

Meanwhile, another study published in the Journal of Functional Foods showed that ACV may help with weight loss. According to the research, those who consumed 15ml of ACV with lunch and dinner lost an average of 4 kilograms over 12 weeks – while also sticking to a diet that was 250 calories less than their daily requirements. On the other hand, those who didn’t drink the ACV lost an average of 2.3kg during the same period.

But there are some downsides to be aware of before you start consuming ACV regularly. According to the University of Chicago Medicine, the acid in ACV could erode your teeth enamel (so it’s important to drink some water straight after), it may also exacerbate any acid reflux you experience, and if you have chronic kidney disease, the organs may not be able to process the acid in ACV.

But drinking it isn’t the only option. Over the years, reputable companies such as Bioglan and Nature’s Way have developed apple cider vinegar capsules. They have the benefits of ACV without the strong taste and smell. There’s the regular options or others that are designed to address certain health concerns, such as the Bioglan Apple Cider Vinegar Daily Detox, which can result in digestive benefits. There’s also the Nature’s Way Apple Cider Vinegar Gummies, which come in a chewable form, if you find it difficult to swallow tablets.

You’ll find a range of ACV products – and many other vitamins and supplements – on the Sassy Marketplace. Click here to browse and shop.

Have you tried ACV? Do you think it had a positive impact on your health?