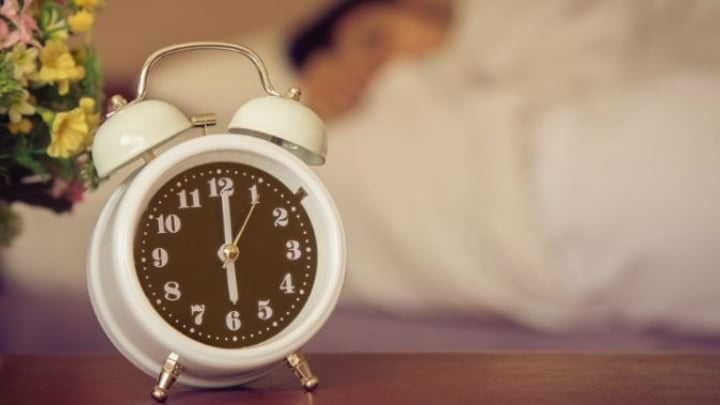 Plenty of Aussies are making this mistake every night.

Millions of Australians are making a bed-time mistake that could be contributing to expanding waistlines around the country.

It’s no secret that some of us need a little help drifting off at night, but one relaxation technique many people use is having an adverse effect on our sleep and, consequently, our waistline: watching TV in the bedroom.

Sleep Health Foundation chair Professor Dorothy Bruck says watching television in bed can do you more harm than good as you become reliant on the background noise and on-screen activity as a sleeping aid.

“The problem is that if you’ve developed the habit of falling asleep with the TV on, when you wake up in the night you can’t self-soothe yourself back to sleep again,” she told Starts at 60.

Many people find that after waking up to go to the toilet or get a glass of water, they lay in bed tossing and turning unable to fall back to sleep because they don’t have the comforting background noise of the TV to help them doze off again.

How does this relate to weight gain?

A recent study found that sleep loss can lead to weight gain by affecting people’s appetite and responses to food and exercise.

The research was presented at the European Congress of Endocrinology in Lisbon last week, with the study’s leader author Dr Christian Benedict saying the faced-paced, high-stimulus nature of the modern world was contributing to the link.

“Since perturbed sleep is such a common feature of modern life, these studies show it is no surprise that metabolic disorders, such as obesity are also on the rise.”

“My studies suggest that sleep loss favours weight gain in humans. It may also be concluded that improving sleep could be a promising lifestyle intervention to reduce the risk of future weight gain.”

The findings support a number of previous studies in this area that showed lack of sleep can leave us feeling lethargic and unmotivated to exercise as well as send us reaching for the sweets jar for a pick-me-up.

Fragmented sleep, where a person wakes up multiple times throughout the night can have an adverse effect on our bodies and minds.

Professor Bruck says many older over-60s are putting themselves to bed too early, leading to fragmented sleep or waking up in the early hours of the morning and not being able to get back to sleep.

“What we often see with older people is because they can’t handle sleep deprivation as well as they used to, they’ll have an early night and they’re in bed by 9pm and get up at 7am,” she says.

“That’s 10 hours in bed when they probably only need seven hours.

“What that means is that those extra three hours get distributed across the night in fragmented sleep.

“So they wake up at 3am and say, ‘Oh God, I know I’m not going to be able to get back to sleep’ because they’ve had those three extra hours.”

She suggests going to sleep much later, or waking up earlier to ensure a solid night’s sleep instead.

“So if you’re getting up at 7am you really don’t need to have the lights out until about midnight,” she says.

Planning late-night activities, like reading, craft, or even paying bills can help keep you occupied until later in the evening.

“It might seem difficult at first, but it’s going to consolidate your sleep more and then when you do need to wake up at 3:30am to go to the loo you can get back to sleep more quickly because you’ve still got a lot of sleep pressure,” Professor Bruck says.

“Whereas if you’ve been asleep since 9pm and then you’re waking up at 3:30am to go to the loo, you’ve had your quota of sleep already so it’s no wonder you can’t go back to sleep because there’s no more sleep pressure left.”

She says one of the simplest ways to help yourself doze off and sleep through the night is by reducing your electronic stimulus before bed.

This means no television, computers or smartphones for at least an hour before bed to let your mind unwind and slow down for the evening.

Do you have trouble sleeping through the night? What time do you usually go to sleep and wake up?