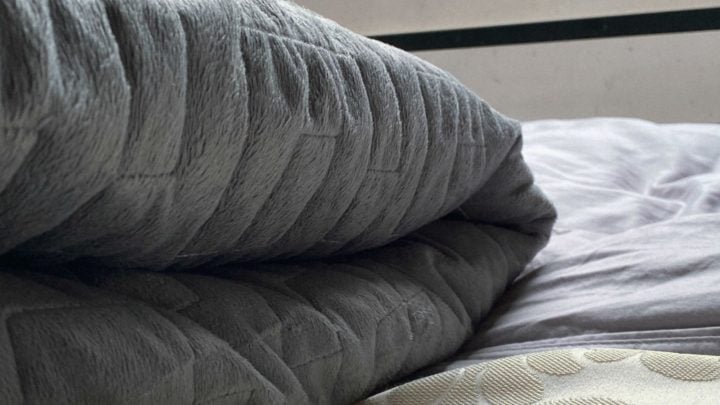 Weighted blankets have been credited with relieving stress and anxiety. Source: Getty.

Weighted blankets are quickly becoming a go-to method for relieving stress and anxiety, and improving sleep, with consumers swearing by the blankets’ calming effects. But what exactly are weighted blankets – and do they work? Starts at 60 spoke to Dougal Sutherland, a clinical psychologist at Victoria University of Wellington, to find out whether they’re worth the hype.

What are weighted blankets?

Weighted blankets are essentially a quilt, with metal, plastic or glass weights sewn into pockets. Created to mimic the benefits of deep touch pressure therapy or the feeling of being hugged, weighted blankets are believed to reduce the effects of insomnia, stress and anxiety. The idea behind deep touch pressure therapy is that it stimulates the release of serotonin and dopamine, two neurotransmitters that tend to make people feel calm and relaxed.

And the concept isn’t new. Weighted blankets were actually originally designed with autistic people in mind.

“People with autism spectrum disorder (ASD) report that being held, wrapped very tightly, or getting into a very tight space, helps them calm down,” Sutherland says. “Weighted blankets are an extension of this idea as they are thought to provide some containment and sense of safety.”

What the experts say

Sutherland says there’s limited research to back up the claims surrounding weighted blankets, adding: “There isn’t a lot of evidence [to suggest] that weighted blankets are particularly useful for older people with sleep or anxiety problems.”

Despite the lack of data around health benefits, Sutherland still says they are worth investing in. “The blankets may provide a convenient way to help which doesn’t involve having to take any medication,” he says. “As there doesn’t appear to be any danger in using them there’s no reason why people shouldn’t use them as often as they need to.”

Have you used a weighted blanket before?