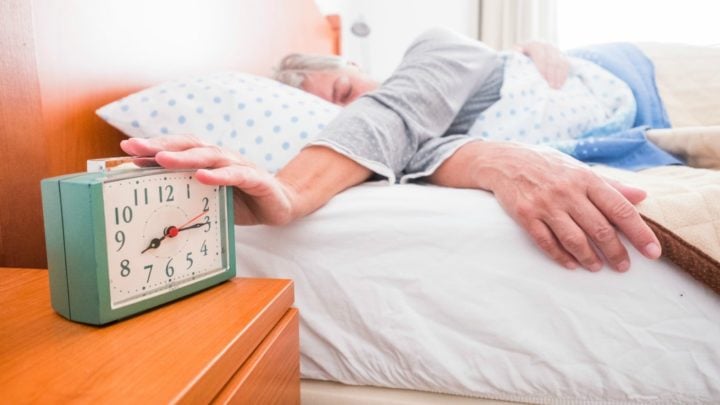 In addition to making us cranky in the morning, new research shows that a lack of sleep increases the risk of cardiovascular events such as stroke and heart attack. Source: Getty

A lack of sleep will leave most people feeling fairly grouchy in the morning but new research has now revealed that a restless night can actually do more harm than many may realise.

Researchers from the University of Colorado Boulder say those who don’t get enough sleep at night are at greater risk of suffering a heart attack or stroke – with people who sleep less than seven hours the most at risk.

People are advised to get between seven and nine hours of sleep a night, but around 40 per cent of all people fall short of this target. In fact, average sleep duration for the average American has fallen from nine hours per night to 6.8 hours in the last century.

Explaining the findings, researchers said that those who miss the recommended amount at night have lower blood levels of microRNAs, better known as physiological regulators, which influence gene expression and play a key role in vascular health.

The findings, published in the Experimental Physiology Journal, could now lead to new non-invasive tests for sleep deprived patients.

Drugs are currently in development to correct microRNAs signatures, something researchers believe will help patients with a range of health issues such as sleep, cardiovascular disease and cancer.

“They are like cellular brakes, so if beneficial microRNAs are lacking that can have a big impact on the health of the cell,” DeSouza said.

Read more: Lack of sleep could be clogging your arteries: Study

Researchers took blood samples from 24 healthy men and women aged between 44 and 62. Participants were also asked to fill out questionnaires about their sleeping habits, which found half of people sleep between seven and 8.5 hours each night and half sleep between five and 6.8 hours. They also measured expression of nine microRNAs associated with inflammation, immune function or vascular health.

The study found people with insufficient sleep had between 40 and 60 per cent lower circulating levels of the microRNAs.

“Why seven or eight hours seems to be the magic number is unclear,” DeSouza said. “However, it is plausible that people need at least seven hours of sleep per night to maintain levels of important physiological regulators, such as microRNAs.”

Researchers are now aiming to discover whether restoring healthy sleep habits can restore healthy levels of microRNAs, but ultimately they found that it’s now possible that microRNAs in blood could be used as a marker of cardiovascular disease in people with insufficient sleep. This could see the blood tests replace current invasive tests to assess cardiovascular disease.

It’s not the first study to link poor sleep with cardiovascular disease. Research published in the Journal of the American College of Cardiology in January found a lack of sleep can increase the risk of developing clogged arteries. Researchers found that a lack of sleep or poor quality of sleep increases the risk of atherosclerosis – plaque build-up in the arteries.

A separate study published in the European Heart Journal found that older men who experience extended episodes of interrupted breathing while asleep have a higher risk of heart problems. Low blood oxygenation during sleep was found to increase the risk of heart-related death by 59 per cent.

Do you think poor sleep can increase the risk of heart attack and stroke? What are your tips for getting a good night’s sleep?