Bacon back on the menu? Researchers claim red meat poses no health risk after all 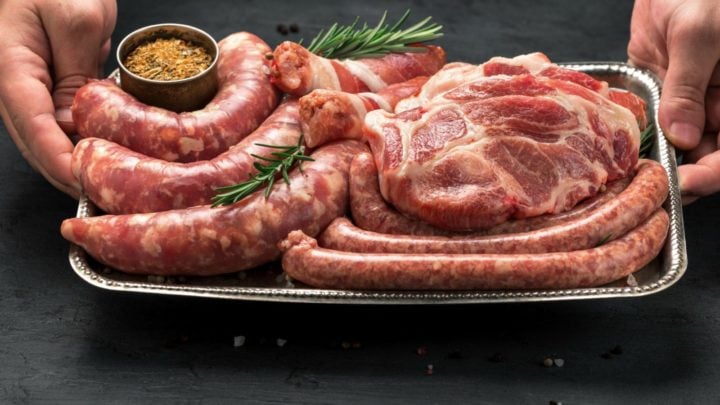 Red meat was once considered bad for you - but not according to a new study. Source: Getty.

There are a seemingly endless stream of research papers and studies across the world constantly warning of the dangers of eating too much red meat – with the World Health Organisation even classifying red and processed meats as cancer-causing. But a team of researchers have now sparked controversy after claiming there’s little to no health risk after all.

The experts from Canada, Spain and Poland analysed a series of past papers on the issue, unpicking the findings and ultimately shunning them – claiming there’s actually no solid evidence that eating red and processed meat could increase the rates of heart disease, cancer, stroke or Type 2 diabetes. They went as far as adding: “We suggest that individuals continue their current consumption of both unprocessed red meat and processed meat.”

Australia’s current guidelines recommend limiting consumption to 455 grams per week, equivalent to around three average servings. The 14-member international team suggested people could continue to eat the weekly average amount of red meat, rather than focusing on cutting down. In fact, lead researcher Bradley Johnston, an associate professor of community health at Dalhousie University in Canada, said: “Based on the research, we cannot say with any certainty that eating red or processed meat causes cancer, diabetes or heart disease.”

He added: “Any health benefits from staying away from meat are uncertain, and, if they exist at all, are very small. For the average person who enjoys eating meat, the uncertain health benefits of cutting down are unlikely to be worth it. We suggest individuals continue their current consumption of red meat and processed meat.”

Aside from health risks, many people choose to cut down on red meat due to potential climate impacts and the greenhouse gas emissions that come from animal farming. However, the researchers did not take into account environmental impacts in the study – instead focusing solely on health.

The research, published in the Annals of Internal Medicine, ultimately found that recommendations to reduce red meat consumption are based on “weak, low-certainty evidence”. Johnston has now called for higher quality nutritional guidelines and added: “Among 12 randomised control trials enrolling about 54,000 individuals, we did not find a statistically significant or an important association in the risk of heart disease, cancer, or diabetes for those that consumed less red and processed meat.”

The latest study has come under fire from some however, with Jim Mann, professor of medicine and human nutrition and co-director of Edgar Diabetes and Obesity Research Centre, saying: “In my opinion the ‘weak recommendations’ based on ‘low certainty’ evidence that adults ‘continue current consumption of unprocessed red meat and processed meat’ are potentially unhelpful and could be misleading.

“The panel opted to consider personal preferences along with cancer and cardiovascular outcomes but not to take into account environmental and animal welfare issues when making their recommendations. In my opinion it is irresponsible not to consider sustainability and planetary health (a key, if not the major, determinant of the health of future generations) when developing nutrient and food-based dietary guidelines.”

Dr Giota Mitrou, director of research at World Cancer Research Fund, said the recommendations of three to four portions a week of red meat are similar to their own previous recommendations, but added: “The public could be put at risk if they interpret this new recommendation to mean [they] can continue eating as much red and processed meat as they like without increasing their risk of cancer. This is not the case. The message people need to hear is that we should be eating no more than three portions of red meat a week and eat little, if any, processed meat. We stand by our rigorous research of the last 30 years and urge the public to follow the current recommendations on red and processed meat.”

The accompanying editorial by authors at the Indiana University School of Medicine admitted they were aware the findings would be unpopular with many, stating: “The overall recommendations, contrary to almost all others that exist, suggested that adults continue to eat their current levels of red and processed meat, unless they felt inclined to change them themselves.

“This is sure to be controversial, but it is based on the most comprehensive review of the evidence to date. Because that review is inclusive, those who seek to dispute it will be hard pressed to find appropriate evidence with which to build an argument.”

How much red meat do you eat every week?