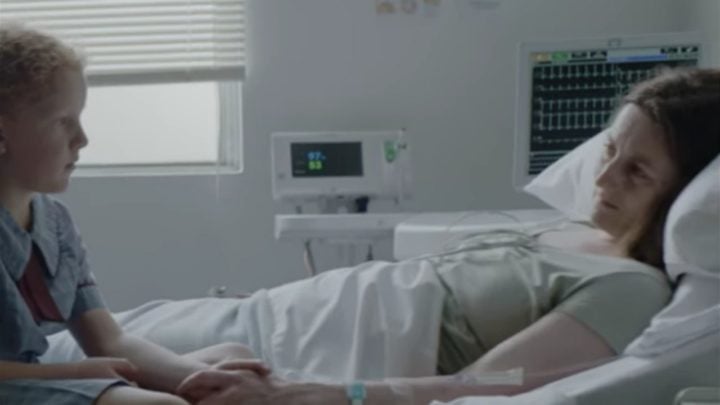 The latest Heart Foundation campaign has sparked debate online by suggesting that people who don’t look after their heart health don’t love their families. Source: Facebook.com/HeartFoundationAU

The Heart Foundation’s new ‘Heartless Words’ campaign — which aims to encourage Aussies to visit a GP for a heart health check — has divided opinion, with many Australians impacted by heart disease branding the advert “appalling”.

The campaign intends to explain that heart disease doesn’t just impact the sufferer, but also the 18,000 families of those with heart disease. Still, many have taken offence to the message in the clip shared on the Heart Foundation’s social media pages.

The video begins with a mother tucking her small child into bed, as she tells her son: “Every time I told you I loved you, I was lying. You are not my priority.”

In another scene, a husband and wife are doing the dishes when a similar scenario plays out.

“I promised you my heart,” the man tells his shocked wife. I’ve given it away,”

A further scene shows a husband and wife at their daughter’s school concert. He tells his wife: “If I really loved you both, I’d protect my heart to protect yours. But I don’t.”

The clip ends with a woman in a hospital bed explaining to her daughter that it’s not just her heart she doesn’t care about, but also her child’s.

The campaign has received backlash, with 2GB radio presenter Ben Fordham confronting Director of Prevention at the Heart Foundation Julianne Mitchell live on air on Tuesday. He described the ad as “disgraceful” and “heartless”.

Mitchell acknowledged that some people were upset by the campaign and that the Heart Foundation has a greater challenge of raising awareness of heart disease as an important health issue for all Australians.

She said that Australians had become complacent and that many don’t consider heart disease personally relevant.

“We are staging this campaign against a noisy background to stress the importance of having a heart health check because if you don’t, then the implications and the impact is not only significant for yourself, but for your family also,” Mitchell said.

“The ad is really saying the consequences of neglecting your heart health are important not only for yourself, but for your family.”

She added that having heart health check could help those most at risk manage the condition and that one of the campaigns causing the most concern had been removed. Mitchell added that the Heart Foundation had received messages from those who had taken a heart check and were grateful and appreciative for the message the organisation was trying to achieve. She said the aim was to start a conversation.

The advert has also sparked debate online, with many left feeling hurt by the campaign’s message.

One person said: “An appalling ad – my sister needed a heart transplant before she died at 37, her children would be truly upset by this. She cared about her heart health and loved her children more than anything.”

Another comment read: “Insensitive, incorrect, totally missing the mark, and a complete marketing fail. This is NOT what I thought my monthly donation to the heart foundation would fund.”

A third added: “Heart Foundation, you have got it wrong on this one. These adds are heartless and deliver a very inappropriate message, especially to children.”

Meanwhile, others supported the message of the campaign.

“You have nailed it Heart Foundation,” one person said. “Very confronting but so, so true.”

A further message read: “Confronting ad but unfortunately true for many. As a mother of a baby sadly passed due to congenital heart disease and the one left behind after the exact situation in this advert I agree it is a strong message but I also think it is needed.”

The Heart Foundation has also been replying to comments online, apologising to people and explaining the reasoning behind the campaign.

“The Heart Foundation is raising awareness about heart disease, the risk factors and what we can do to identify and manage our personal risk of developing heart disease,” a message to many people reads. “With this campaign, we are educating Australians on what can happen when they don’t look after their heart health.

“Our aim is to encourage people to see their GP for a Heart Health Check. The campaign is a powerful reminder of what’s at stake.”

The Heart Foundation issued a public apology on Friday following the controversy and said the current ad running across social media would be pulled.

“To all the people who have been offended by our campaign, we apologise, and to all those who provided their feedback, we have listened,” Chris Leptos, chairman of the Heart Foundation Board, said in a statement. “We tried to take a bold and emotive approach. We misjudged it. We had never intended to further hurt people already struggling with heart disease, or to further pain loved ones who have lost people to heart disease. It is clear, however, that many people feel we did both of those things.”

Do you think the Heart Foundation campaigns are offensive, or are they necessary to get people talking about heart health?