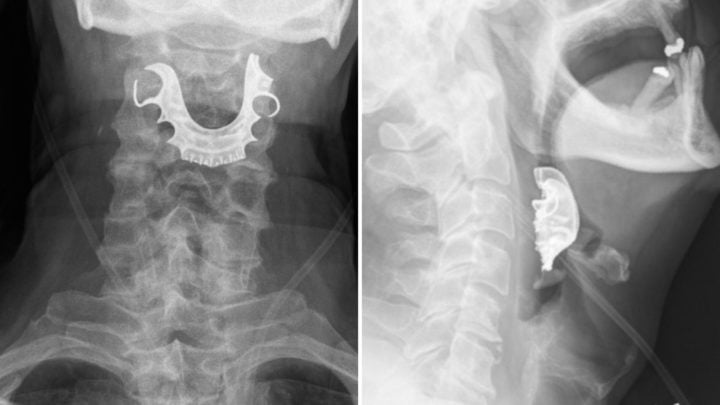 Dentures were found in a man's throat eight days after he underwent surgery, with experts warning people to take their false teeth out if undergoing general anaesthetic. Source: BMJ Case Reports

Researchers are calling for people who wear dentures to put their shame aside and remove them if they’re being given general anaesthetic after a 72-year-old man’s false teeth were found lodged in his throat eight days after he underwent surgery. While it’s perfectly normal for people to take their dentures out while they sleep at night, people may be less inclined to do so for visits to the GP or with health professionals due to fears of embarrassment.

Experts have warned that leaving dentures in when undergoing anaesthetic could result in further hospital visits, invasive tests and even more surgery if they do end up somewhere they’re not supposed to be. The man in question experienced considerable pain, bleeding and difficulty swallowing, with an article in the BMJ Case Reports Journal explaining he also required repeated hospital visits, additional invasive tests, blood transfusions and more surgery, after failing to remove his false teeth before going under.

The man turned up to the emergency department six days after his initial abdominal surgery. However his symptoms and side effects pointed to a respiratory infection, which can be common for patients who have had a tube down their throat during surgery, so he was prescribed steroids, antibiotics and mouthwash and sent home.

However his symptoms worsened and, after two days of taking the prescribed medication, he was admitted to hospital with what doctors believed to be aspiration pneumonia – a severe chest infection that occurs when food, stomach acid or saliva is inhaled into the lungs. Upon further investigation, doctors discovered a semi-circular object lying across the patient’s vocal cord – which had caused internal blistering.

Read more: How to best adjust to life with dentures

The man later confirmed to health professionals that his dentures – which included a metal roof plate and three false teeth – had been missing since his original operation. He required emergency surgery to remove the dentures and while he was discharged after six days, he soon returned to hospital because of further bleeding.

Doctors had to perform a blood transfusion on the man because he lost so much blood and cauterised internal wound tissue to prevent bleeding. That still didn’t work and nine days after he was discharged, he was admitted to hospital once again with further bleeding, which was the result of a torn artery.

This final surgery was successful and after six weeks the man required no further emergency care and his blood count returned to normal. As horrific as the story is, experts say it’s not the first time dentures have been inhaled while anaesthetic was being infused.

It’s always important to notify health professionals about false teeth or dentures when undergoing any surgical procedure. There may be cases where they allow dentures to remain in the mouth, but removing them may be the safest option in other surgeries.

Read more: Gran asks for advice about dating with dentures and hilarity ensues

Do you wear dentures? Have you ever experienced anything like this?