Being happily married can reduce risk of dementia, study finds 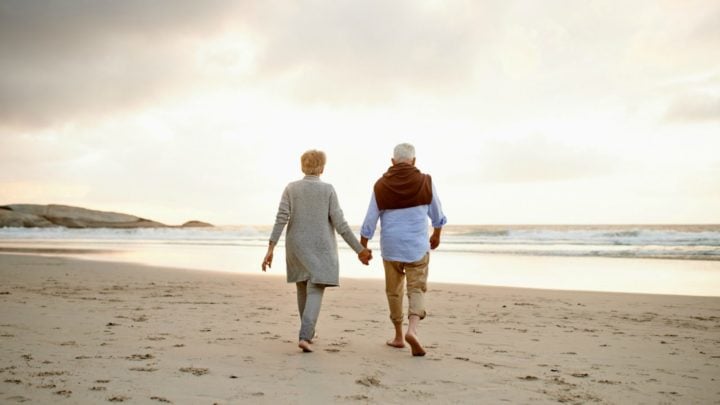 Researchers now believe a happy marriage may be vital in staving off dementia. Source: Getty

Dementia can have devastating impacts on a person’s thinking, behaviour and ability to perform daily tasks and while there’s currently no cure, researchers believe a happy marriage may stave off the group of conditions that impact brain function.

Researchers from Sweden explored whether a person’s mood, marital status and living situation is related to an increased risk of dementia and analysed two studies of older adults from different generations. The report, published in the American Journal of Geriatric Psychiatry, followed more than 4,000 over-60s for more than a decade.

The study found that the risk of dementia over nine years was 20 per cent greater in people who had a low mood than those who were happier. This increased risk was observed only in people who lived alone or didn’t have a partner and not those who were married or lived with someone.

Researchers found that participants who lived alone also had an increased risk of dementia in a three-year follow up period compared to people who were married or lived with someone else. Interestingly, it was found that when a person’s marital status and living situation were both taken into account, participants who suffered from a low mood and had a partner but lived alone or those who were single were 40 per cent more likely to develop dementia.

“Having a partner or living with someone can provide both mental and social stimulation, as well as promote engagement in healthy behaviours, which may enhance the cognitive reserve capacity,” researchers wrote. “Individuals with greater cognitive reserve may have more efficient and flexible brain networks, and therefore cope better with depressive symptoms, such as low mood, and brain pathology or damage, which subsequently could delay the onset of dementia.”

Researchers also said that partners can provide emotional, practical and economic support which can lower levels of psychosocial stress and boost their loved one’s mood. This could also explain why participants who didn’t have a partner had an increased risk of dementia when experiencing mood.

In cases where people were in a relationship but not living with a partner, researchers explained that it was likely they could be living in an institution or hospital, which could cause further psychological strain and burden and increase the risk of developing dementia.

Of course, there are also biological mechanisms that may impact a person’s likelihood of developing dementia, with researchers pointing out that both depression and dementia can increase inflammation on the brain. Other hormones called glucocorticoids can increase harmful proteins on the brain which can cause cognitive dysfunction and damage.

The study follows research released last month by the Michigan State University in the USA which found married people are less likely to experience dementia as they age and divorcees are about twice as likely as married people to develop dementia.

That research, published in The Journals of Gerontology, analysed four groups of unmarried individuals including those who were divorced or separated, widowed, never married and cohabiters and found divorced people were at the biggest risk of dementia.

“This research is important because the number of unmarried older adults in the United States continues to grow, as people live longer and their marital histories become more complex,” researcher Hui Liu said. “Marital status is an important but overlooked social risk/protective factor for dementia.”

It’s estimated that 50 million people worldwide are living with dementia, with 10 million new cases diagnosed each year. While Alzheimer disease accounts for up to 70 per cent of cases, there are more than 100 different types which can impact a person’s behaviour and physical abilities as well as their memory.